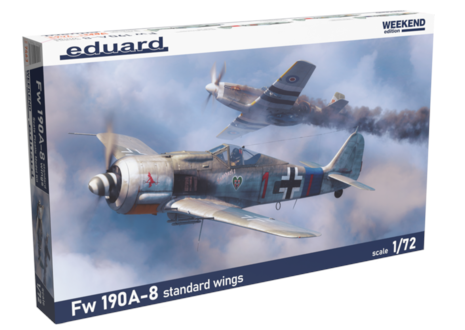 Eduard has reissued their Focke-Wulf FW190A-8 standard wing as a Weekend Edition kit. It consists of 117 parts on 3 sprues, 2 gray and one clear. The surface detail on the wings and fuselage consists of finely engraved panel lines and rivets where appropriate. The ailerons and horizontal stabilizers have subtle fabric detail. The cockpit is a multi-piece assembly that will look great with careful detail painting, dry brushing and an oil wash. The kits include a sliding canopy to display the results of your efforts. The decal sheet includes an instrument panel and seat harness. If you choose to use the harness decal attach it to some rice paper tape so that the harness looks more 3 dimensional and drapes convincingly over the seat.

The wheel wells are deep and have convincing detail. The landing gear look good, the the tail wheel is nicely detailed and you get a lower fuselage drop tank/bomb rack and an auxiliary fuel tank to mount under the fuselage.

The BWM 801 radial engine is admittedly simplified for 1/72nd scale but its detail is superb and will come up nicely with an oil wash and careful dry brushing.

Weekend Edition kits used to have a single decal option but Eduard has expanded this to include 4 different markings to choose from. All aircraft have the standard (non "blown") canopy:

"Red 1", Lt. Hans Dortenmann, 2./JG 54, Villacoublay, France, June 1944. This A-8 was painted in the classic mid-War RLM 74/75 Grays over 76 camouflage with a blue fuselage band, RLM 04 Yellow lower cowl plus a black spinner with a wide white spinner spiral. The fuselage had a modest 74/75 mottle and the cockpit storage door was painted RLM 74.

"Yellow 7", Ofhr. Walter Köhne, 3./JG 1, Bad Lippspringe, Germany, May 1944. This Wurger was painted in the classic mid-War RLM 74/75 Grays over 76 camouflage with an RLM 23 Red fuselage band, RLM 04 Yellow lower cowl and black spinner with a wide white spinner spiral. The fuselage had a modest 74/75 mottle.

The 2 decal sheets are up to Eduard's customary high standards. They have good registration, bright crisp colors and great legibility. One sheet covers the 4 marking options and the second sheet is a set of air frame stencils.

I'm glad that Eduard's Focke-Wulf FW190A-8 kit is available again. It is accurate, the detail is great and all 4 decal options are interesting and appealing. Get one of Eduard's seatbelt sets to spice things up. I recommend this kit and I would like to thank Eduard for the review sample.