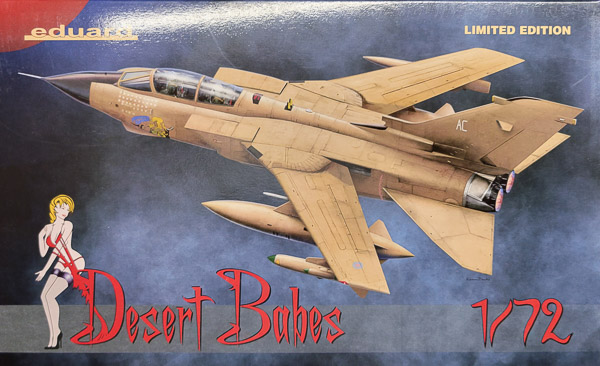 Eduard continues their trend of taking quality plastic kits from other manufacturers and adding their own details and interesting decal options, this time around with the classic Revell 1/72 Tornado GR.1. Marking choices for the Tornado GR.1 are plentiful, but when it comes to interesting schemes, the RAF desert schemes from Desert Storm tend to rank the highest. With their interesting nose art and extensive scoreboards, coupled with heavily weathered desert camouflages, these Tornados are definitely some of the more striking schemes.

The Revell 1/72 Tornado GR.1 has been around for a while now, and it remains one of the best options for this subject in this scale. Superb interior detailing, recessed panel lines, and plenty of options makes for a great model project. As it has been out for a while, though, the molds are a bit tired these days, and this is reflected in a bit of flash around several of the parts. Cleanup should be pretty easy, however, and shouldn't detract from the build. The Eduard accessories include resin seats and wheels, photoetch details, and a set of masks, while the decal sheet provides eight options.

Jumping into the cockpit, there's a lot of added details here, so be ready to work with lots of photoetch and resin. Starting with the seats, while the plastic parts are decent, the resin replacements are a significant improvement. Further adding to the detailing of these seats are the photoetch belts and ejection handles, with the end result being a pair of seats that will seem almost sacrilegious to hide away in the cockpit.

A similar level of detail is provided in the cockpit tub. Again, the kit parts are not bad, with raised detailing, but Eduard's pre-painted photoetch add so much more. The rudder pedals are completely replaced with much more petite and to-scale photoetch parts, and the side consoles & instrument panels get the high-detail pre-painted photoetch we've come to expect from Eduard.

With the interior done, the rest of the build falls into that category most Tornado kits fall into: lots and lots of fuselage parts. The complex shape of the plane kind of makes that a requirement, unfortunately, so be ready for a fair bit of cleanup and test fitting. With some care, it might be possible to avoid using any filler. The nose section is split into right and left halves, with a separate nose cone, and photoetch details get added all around the cockpit area. The rear fuselage is split into upper and lower halves, which means the wings and tailplanes are trapped between the two.

After adding bits and bobs to the main assembly, such as the intakes and exhausts, the next big area of attention is the landing gear. Here's where the next batch of Eduard resin shows up, with some excellent replacements for the wheels & tires. The nose gear strut also gets a photoetch replacement oleo strut, while the rest of the detailing in the kit parts is more than solid in this scale. There are also separate landing lights for both the nose gear and main gear. There are lots of extra antennas and such that are photoetch replacements, and quite a few extra plastic bits for under the nose, all of which will add quite a bit to the final look of the model.

One nice feature of this kit is all the various weapons and such to hang underneath the plane. It comes with two 1500-liter tanks, two 2250-liter tanks, two CPU-123 laser guided bombs, a Sky Shadow pod, two AIM-9 Sidewinders, a BOZ 101, two ALARM missiles, and four 1000lb bombs. These options give you plenty of diversity for stuff to hang under the wings (and fuselage), and if you get more than one kit you can guarantee each will have a unique load-out.

With all the bits and pieces in place, and the included masks applied, it's time to turn to the camouflage options. As this boxing is titled "Desert Babes", all the options are desert schemes finished in overall desert yellow, with a black radome and dark gray areas around the wing sweep areas. The main difference between all the schemes is with the nose art, with five different squadrons covered. These include the following:

Each of these has interesting nose art and scoreboards on their fuselages, so whichever one you choose, it'll be an interesting scheme.

If you've had a hankering to do a Desert Storm Tornado, this is definitely the kit you'll want to get. The Revell kit builds up into a great little model, and the Eduard add-ons just take it to the next level. My thanks to Eduard for the review copy.