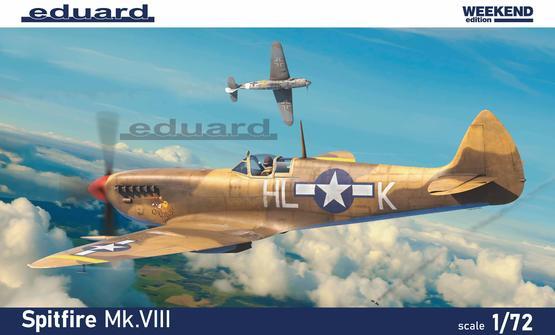 Eduard has reissued the Spitfire Mk.VIII as a Weekend Edition kit. It consists of 180 parts on 6 sprues, one of which is clear. I'm not aware of any changes to the sprues, and that's good. The surface detail on the wings and fuselage consists of finely engraved panel lines and rivets where appropriate. The ailerons and horizontal stabilizers have subtle fabric detail. The cockpit is a multi-piece assembly that will look great with careful detail painting, dry brushing and an oil wash; you can use the optional sliding canopy and open cockpit door to display the results of your efforts. The decal sheet includes an instrument panel and seat harness. If you choose to use the harness decal attach it to some rice paper tape, so that the harness looks more 3 dimensional and it drapes convincingly over the seat.

The wheel wells are deep and have nice detail. The landing gear look good and you can choose from 3, 4 or 5 spoke wheels. The wing mounted radiators are commendably deep, the tail wheel is nicely detailed and there are 2 different "slipper' auxiliary fuel tanks to mount under the nose. The cannon and machine gun covers are separate which will ease the assembly and painting stages.

Weekend Edition kits used to have a single decal option but Eduard has expanded this to include 4 different markings to choose from:

"ZP * W", A58-606, S/Ldr Bruce Watson, CO of No. 457 Squadron, Labuan, Borneo, August 1945. One of the so-called "Grey Nurse" shark mouth Spits of the RAAF, this colorful Spitfire was painted Ocean Gray/Dark Green/Medium Sea Gray with a Sky Blue spinner and fuselage band. The fuselage between the cockpit and fin was over painted with medium green. Note the replacement rudder.

class="Paragraph">the 2 decal sheets are up to Eduard's customary high standards. They have good registration, bright crisp colors and great legibility. One sheet caters to the 4 marking options and a second smaller sheet is a set of air frame stencils.

Eduard's instructions are well illustrated with a logical build sequence, parts map, color callouts for GSI Creos (Gunze) Aqueous and Mr. Color plus Mission Models paints. There are also color profiles of all 4 marking options plus a stencil application guide.

I'm glad that Eduard's Supermarine Spitfire Mk.VIII kit is available again. It is accurate, the detail is great and all 4 decal options are interesting and appealing. Get one of Eduard's seatbelt sets to spice things up. I recommend this kit and I would like to thank Eduard for the review sample.

Spitfire in Action, Aircraft No.39, by Jerry Scutts, Squadron/Signal Publications, 1980