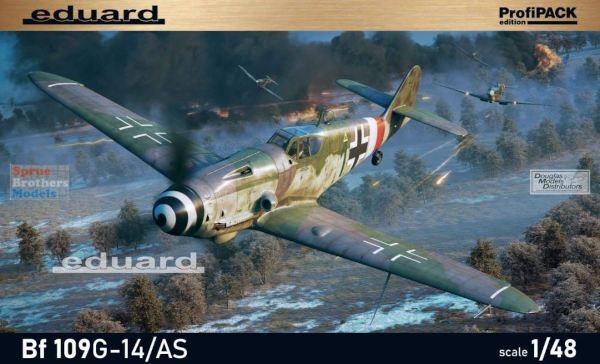 The Messerschmitt Bf109G-4/AS was developed to intercept enemy aircraft at higher altitudes, entering service with the Luftwaffe in July of 1944. The G-14/AS was converted from standard G-6 aircraft. Some were equipped with the MW-50 (Methanol/Wasser) system and the DB 605AM engine. Others used the FuG 16zy radio set with a Morane antenna underneath the fuselage; these were designated G-14/AS/y and served as high altitude command fighters.

Eduard's reissued ProfiPACK kit comes in their customary stout box with cool artwork of a Bf109/AS fighter engaged in low altitude, treetop level battle with a Spitfire Mk. IX. The kit consists of 244 parts. 200 of these are plastic on 5 sprues, 43 parts are photo-etch on a single fret plus a sheet of rice paper masks.

The multi-piece cockpit will look great with an oil wash and some careful drybrushing. The landing gear, gear doors, drop tank, etc. all look good, too.

Eduard's decals are crisp, with bright colors and good registration. There are 2 sheets, including 2 sets of air frame stencils. There are 5 different aircraft options:

W. Nr. 785083, Sgt. Magg, Aroldo Burei, 1ª Squadriglia, 1° Gruppo, Caccia ANR, Malpensa, Italy, April 1945. The camouflage was RLM 75/82/76 with a loose 75/82 mottle and the plane had a black spinner with a white spiral and an RLM 70/white spinner backing plate.The fin, rudder and aft fuselage were overpainted with light gray with fat RLM 70 squiggles. Much of the lower wings were natural metal.

The instructions are up to Eduard's usual standards. The instructions include a parts map, a well illustrated and logical build sequence, full color profiles of all 5 decal options and a stencil application guide. Color call outs are for GSI Creos (Gunze) Aqueous, Mr. Color and Mission Models paints.

The G-14/AS Weekend has 5 exciting decal options and you have your pick of the various Brassin, Löök, Space and PE sets if you want to add some additional detail. I recommend this Bf109 kit and I would like to thank Eduard for the review sample.