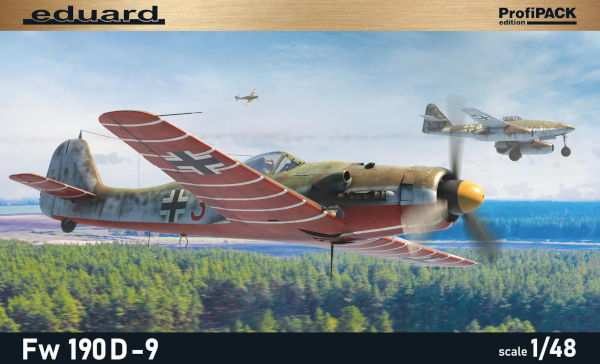 This is Eduard's D-9 kit reissued in a ProfiPACK boxing. It's a multimedia kit of injection molded plastic, photo-etch and rice paper masks. It consists of 192 parts, 133 of which are plastic on 6 sprues. 6 of the parts are surplus and destined for your spares box. The clear sprue includes 8 parts.

There are 59 PE parts, most of which are pre-painted, on a single non-adhesive fret. The masks includes the main wheels, tail wheel, windscreen plus masks for regular and "blown" canopies. The quality of Eduard's injection molding is above reproach. The surface detail consists of rivets and both raised and recessed panel lines where appropriate.

You have your choice of open or closed cowling rings, main wheels with or without tread, and a one-piece tail wheel or one with a separate, 2 piece fork and tail wheel. Some might find the one-piece tail wheel easier to paint. The rudder and ailerons are molded separately and the fabric effect is well depicted. The wheel wells are a detailed, complex, multi piece assembly.

The D-9 cockpit was painted Dark Gray RLM 66. Despite its dark color the cockpit is busy and it will look great with an oil wash and dry brushing. Much of the PE fret is devoted to the cockpit and it includes rudder pedals, seat harness, a new instrument panel, canopy opening wheel, and sidewall consoles. The upper wing gun bays can be depicted open or closed. For the lower wing pylon you have your choice of a 500 KG bomb or drop tank.

"Red 3",W.Nr.600?69, Hptm. Waldemar Wübke, Sachsenberg Schwarm. Ainring, Germany, May 1945. One of the famous Me262 Protection planes, this colorful aircraft had the "blown" canopy. The fuselage was painted in RLM 81 and 82 over RLM 23 Red. The upper wings were 81/82. The lower surfaces had thin white stripes to help prevent these planes from being shot down by their own anti-aircraft guns(!). The spinner was black with an RLM 04 Yellow tip.

"Black Chevron", Stab I./JG 2, Frankfurt/Rhein-Main, Germany, April 1945. Another colorful aircraft, this D-9 was painted in RLM 81/82 with an RLM 04 Yellow and white fuselage band. The upper wings were RLM 76/81. The lower wings were a mix of natural metal and RLM 76. There was a dense RLM 81/82 mottle on the cowlings and canopy area.

The 2 decal sheets (a large one for markings and a smaller sheet for stencils) are up to Eduard's usual standards with crisp, bright colors and blacks. They are legible and in-register. The instruction sheets follow Eduard's customary pattern with a brief D-9 history, parts map, a well illustrated and logical build sequence, color aircraft profiles, stencil decal application guide, and color call outs for GSI Creos (Gunze) Aqueous, Mr. Color and Mission Models paints. This is a top notch presentation.

The Focke-Wulf FW190D-9 is one of my favorite World War II planes and Eduard has done the aircraft justice with this reissue. It is accurate and well detailed. You can produce a great model right out of the box or you can upgrade the kit with some of Eduard's Brassin and PE sets. The D-9 was a colorful aircraft and all of the decal options are interesting. I recommend this kit and I would like to thank Eduard for the review sample.