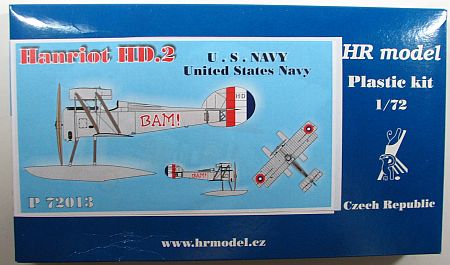 The Hanriot HD.2 was a continuation of the HD.1. When Hanriot decided to modify the HD.1 to be used as a floatplane, it was labeled as the HD.2 after production. The major differences between the HD.1 and the HD.2 – aside from the floats – are the enlarged vertical tail surfaces (rudder, fin and extra under the fuselage), as well as the replacement of the Le Rhone with the Clerget 9B engine. Its primary design was to be a fighter to defend flying boat bases but was also used as an escort fighters for those flying boats. The HD.2 was the only Hanriot fighter the French used, since the SPAD VII was being used to replace all other French aircraft in their Escadrilles, and the Hanriot's specifications were pretty close to the Nieuports the SPADs were replacing. The HD.2 was also used by the US Navy, both during WW1 as well as immediate post-war. After the war the US Navy had their HD.2s converted to land aircraft, replacing most of the unique HD.2 elements with those from HD.1s. The only item not replaced was the Clerget engine. 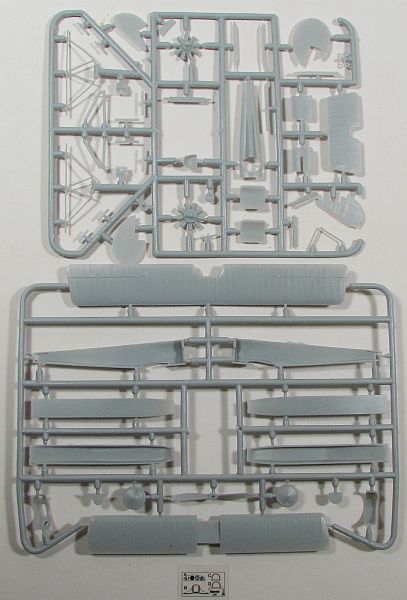 You'll notice a lot of similarity between HR Model's HD.2 and their HD.1s.  That's because both aircraft kits use the same sprue. So, as a builder of HD.1s you'll be left with extra rudder/fins as well as the floats and Clerget  engine. As a builder of the HD.2, you'll be left with extra rudder/fins and an extra Le Rhone engine. In addition, depending on if you build it with the floats or landing gear, the other parts will be extra. Since it uses the same sprue as the HD.1, the kit comes with 56 pieces of gray, injected plastic and the same piece of clear film. There are decals for five different US Navy aicraft:

I believe the WW1-era machines would have been in overall aluminum dope, while the post-war were mainly in Naval Gray.

One item the instructions miss. Step 2 has you glue a piece to the back of the engine. The instructions show the wrong engine. The HD.2 used the Clerget engine, and that is part 26 not part 32 as shown. Even when the US Navy "HD.1-ised" their HD.2s post-war, they still flew with the Clerget engine. So, use part 26 and put part 32 into the spares box. 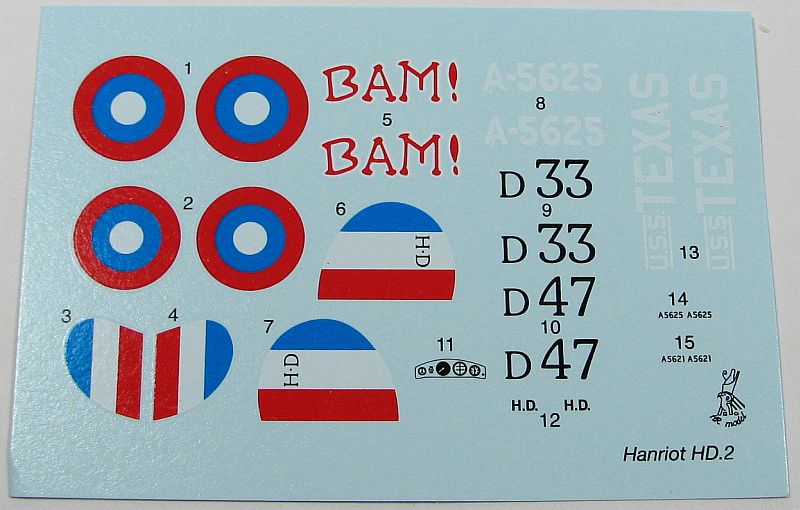 The same comments with the HD.1 applies to the HD.2.  The only cockpit details the kit comes with is a seat (that needs perforations drilled out), control column, rudder pedals and instrument panel (which is where the clear film and/or decals are used). There is no other detail, especially sidewall, so if you want to add any cockpit detail, do so before the fuselage halves are assembled.

From here assembly follows exactly the same until you reach the end. However, pay attention to the rudder/fin parts. The HD.2 with floats had the much larger rudder/fin, so use part 13 if building the HD.2 with floats. If you're finishing your HD.2 as a post-war US Navy aircraft, then use the same fin/rudder that is for the non-Italian HD.1, part 20.

At the end is also when you need to finalize your decision on floats or landing gear because it is on the last step - step 6 - where you install these, and naturally would be after most assembly is finished as well.

Again, as with the HD.1, there is no rigging diagram within the HD.2 instructions. Definitely track down other references before you rig your model.

An excellent addition to their HD.1, HR Model's Hanriot HD.2 is an excellent model, one definitely worth tracking down. Since everyone usually models "Bam!" I won't be doing that one. Instead I'll probably finish mine as one of the "land-ized" post-war US Navy aircraft. There are two decal sets for two different aircraft with the kit, and another that came with an older Blue Rider US Navy set. An interesting addition would be to scratch build the floatation gear that were used on the land-based aircraft, and resided under the lower wings.

Many, many thanks to HR Model for sending this kit to review.