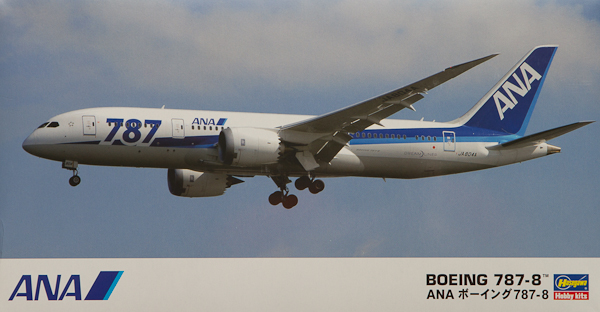 The Boeing 787 marks a dramatic shift in airliner manufacturing, with the aircraft featuring a significant portion of its construction from composites. This creates an aircraft that is lighter yet still strong, resulting in better fuel economy. The first 787 took to the air on December 15, 2009, and the first aircraft was delivered to ANA on September 26, 2011. The story of the 787 is a fascinating one, and telling it thoroughly would far exceed the space here, so I recommend reading any number of online or print sources should you want the complete story.

This is the first 787 kit in 1/200, and the first new airliner kit from Hasegawa in quite some time. Molded in white plastic, the kit is nicely detailed, with recessed panel lines and a comprehensive decal sheet covering the launch customer. The kit also comes with a stand, should you wish to display the finished model in flight configuration.

Traditionally, aircraft model construction begins with the cockpit. While some airliner models have a rudimentary cockpit, there is no such assembly here. That's because the windscreen is solid, molded into the fuselage halves, with only a scribed line denoting their location. This will make building this kit much easier, but I would have liked to have seen the option of clear parts here. With no cockpit to build up, the only thing to do before buttoning the fuselage up is to screw in the bolt in the forward bulkhead (nose weight included, a very nice touch) and glue the front and rear bulkheads in place. The fuselage has a separate nose cone and tail cone, and with those in place, the assembly is done.

The wings and stabilizers are next. Both have similar construction, with the upper pieces having solid outer sections and trailing edges, with a separate lower inner section. For the wing, this separate section is one piece and includes part of the lower fuselage. There is also a center keel piece that is separate, and the instructions denote some cutting in this part should you wish to use the stand. There are two separate flap track fairings, and with those in place attention can turn towards the engines.

The engines are really nicely done in this kit. The intake lip is molded as a solid piece, as is the tail cone with its sound-suppressing flutes. There are separate fan blades for the front and rear section, both of which are trapped between the two engine nacelle halves. A separate vane for the nacelle side finishes the assembly of the engine nacelle, and these then fit into slots in the wing. The entire assembly looks like it will go together with minimal effort and have no challenging seams to fill.

The final step in assembly is the landing gear. There are two options in this kit: gear up or gear down. The gear up option has separate one-piece wheel door assemblies for all three gear bays, greatly simplifying assembly. For the gear down option, the nose gear is simply the strut with separate wheels and separate doors. The main gear struts are a bit more complex, with four wheels on each strut and a separate retraction strut. The detail throughout here is quite good for the scale, and the finished landing gear will look nice once given a subtle wash.

The decal sheet is large and full of useful bits and pieces. Of course the big parts are there for the ANA scheme. This is the delivery scheme, which features large 787 titles on the forward fuselage. The decals include registrations for four aircraft: JA804A, JA805A, JA806A, and JA807A. In addition to the base livery decals, the decal sheet includes a lot of stencil and warning markings. It is these little decals that will really add to the realism of the finished model. The decals are nicely printed and those familiar with Hasegawa decals know what to expect here.

This is likely to be the only 1/200 787 kit we'll see, and out of the box it will build up into a very nice model. For those wanting to do a bit of modification, stretching this into a 787-9 would be simple, as there are very few panel lines on the fuselage (composite construction limits those quite a bit). Hasegawa has already announced their next 787 release in JAL markings, and I am sure we will see this released several other times as more airlines take delivery. My thanks to Hasegawa USA for the review sample.