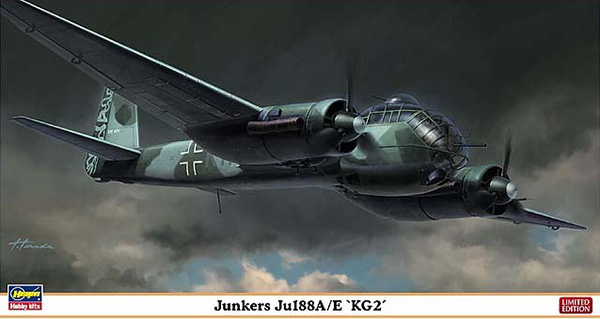 While the Junkers Ju 88 family was quite successful, the follow-on designs met with quite a few challenges. As the Ju 288 was behind schedule, Junkers was asked to produce an interim improved Ju 88 to fill the gap. The result was the Ju 188, which featured a redesigned nose, the larger squared vertical fin, and longer wings. Initially designed to be powered by the Jumo 213, delays in the production of that engine resulted in the Ju 188 design incorporating complete bolt-on engine assemblies. This way the aircraft could enter production with the BMW 801 engine and when the Jumo 213 became available, production could shift to the newer engine. The Ju 188A was the designation for aircraft powered with the Jumo engine, while the Ju 188E was powered by the BMW. Roughly 500 Ju 188A/E aircraft were built.

Hasegawa's superlative 1/72 Ju 88 family is quite extensive, and one of the more impressive options in that lineage is the Ju 188. This Limited Edition release brings the Ju 188 back, this time with some attractive markings for a pair of KG 2 aircraft. The kit comes molded in the usual Hasegawa light gray plastic, with recessed panel lines and overall great surface detail.

Jumping into the actual construction, the starting point in the instructions is with the cockpit. This is really quite well done for an injection molded cockpit, with separate sidewalls, accurate cockpit floor, and rear bulkhead. The rudder pedals, control column and seats are all separate, as is the armament. There is a fair bit going together in this cockpit, at different levels, and there is a nice side view drawing showing how all of it should look when finished. The decal sheet provides some of the instrument dials and faces, and with some careful work, this will be plenty good enough under the greenhouse canopy.

The finished cockpit is sandwiched between the two forward fuselage halves. The rear fuselage is common between all the Ju 88 family, so it's understandable that it is separate. That assembly gets a pair of wing spars, an insert for the upper fuselage antenna, and the tailwheel assembly. The latter is made up of a two-piece strut and a one-piece wheel, which should look quite good when finished. With the rear fuselage together, simply mate up the forward fuselage and you can turn your attention to the wings. A quick test fit shows that, although made up of four pieces, filler will be minimal on the fuselage assembly.

Moving to the wings, these are fairly straightforward. They are split into upper and lower halves, with separate inserts for the wheel wells. The wingtips are separate, and this is probably the biggest fit issue area in this kit. I recommend gluing the wingtip to the upper wing piece and make sure that it is straight, then add the lower wing half. This method will greatly reduce or even eliminate any potential step issues that might arise. At this point you also need to decide if you are building a Ju 188A or a Ju 188E, and attach the appropriate engine nacelle rear section to the wing assemblies.

The kit comes with both the Jumo and BMW engines. The Jumo engine is made up from two side pieces, option open or closed cowl flaps, and a separate front piece. The exhausts are split into upper and lower pieces, with a separate front. The BMW engine is a bit more complex, with a two-piece center insert that has the engine cylinders mount onto. The crankcase is separate as are the exhaust stacks. Finally, the actual cowling is made up from two side pieces and a separate front ring. This is a bit complicated, but the final assembly will only have two seams to deal with, so it shouldn't be too tough in the end.

For the underside, the kit comes with four underwing bomb racks with two SC250 bombs and two SC500 bombs. The bomb racks feature separate shackles. I would have liked to have seen drop tanks as well, but those can be scrounged from other sources. While on the underside, the main landing gear is quite nicely done, with detailed and accurate wheels for the Ju 188 and a five-piece gear strut. The strut has a very sturdy attachment arrangement that will fit very positively into the locating holes in the wheel well inserts.

The decal options are both interesting choices. Both have the standard base splinter camouflage of RLM 70/71 over RLM 76, but both feature additional camouflaging. The Ju 188A is from 1./KG 2 and features large areas of RLM 76 painted over the upper surface camouflage, while the entire undersurface is black. This aircraft was based in France in late 1944 and carries the code U5+KH. The second option is a Ju 188E from 4./KG 2 and is coded U5+EM. This plane features squiggly lines of RLM 76 all over the upper surface camouflage. The decals are quite nice and feature swastikas in a section set apart from the rest of the sheet. I am sure this is so they can be easily trimmed away for those countries that have outlawed that insignia.

This is a great kit of the Ju 188, far better than its competition, and if you are looking to build a model of this interesting Junkers bomber, definitely track it down. My thanks to Hasegawa USA for the review sample.