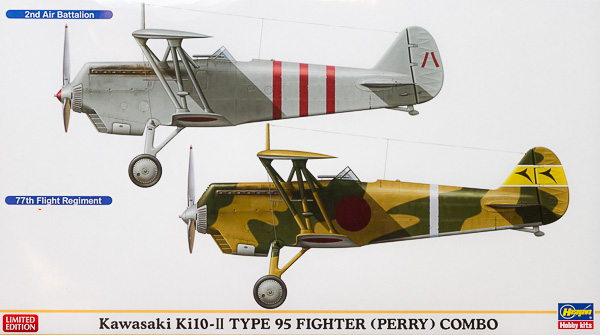 The Army Type 95 Fighter was the Imperial Japanese Army's last biplane fighter. Entering service in 1935, the Ki-10 saw operations in the Second Sino-Japanese War in northern China, but was outclassed by Soviet aircraft by the time of the Nomonhan Incident. After that, the Ki-10 continued on in training, patrol, and reconnaissance missions up to early 1942.

Continuing the relationship with ICM, Hasegawa has boxed up a pair of the ICM 1/72 Ki-10-II kits in this combo boxing. There is one sprue for the entire kit, not including the piece of clear acetate for the windscreen. Overall the detailing is nice, if simple. The original plane did not have much to it, so this is accurate while also making it a simpler model to assemble. The decal sheet provides three marking options, two from 1937 and one from 1939.

Starting with the interior, the cockpit opening is pretty small but you still get a decent cockpit. There's separate rudder pedals, control column, and instrument panel and a basic seat that mimics the simplicity of the original. Some sidewall detail is molded on the fuselage sides, and once together and buried in the cockpit it'll look pretty good. Add some bits for the ends of the two cowl guns and some aftermarket belts such as the Eduard fabric seatbelts and you'll have a solid interior.

For the actual fuselage construction, to keep the detail on the curves and troughs of the upper fuselage, this piece is separate, as is the nose front. So assembling the fuselage is a bit more complicated than most, but with some dry fitting it should go together smoothly. The rudder is separate and the stabilizers are butt-joined solid pieces. The latter can be problematic in terms of seams, but again dry fitting helps alleviate those issues.

For the wings, the lower wing incorporates part of the fuselage underside, which will aid in alignment. The wing struts are done as single pieces for the outer wings and cabane struts, so use your best method for aligning and assembling these to keep the one-piece top wing set up correctly. If you choose option one and three from the decal sheet, you can assemble all of this ahead of time as those two schemes are a single overall color. For the second option, though, with its camouflage pattern, you'll want to keep the top wing off to aid in painting.

The final bits include the landing gear, which has sturdy main struts attaching to a single-piece axle that incorporates the cross brace struts. The propeller is made up of individual blades fitting onto a one-piece hub, and there is a small antenna that is fitted to the top of the upper wing. With those in place, the next step is painting and decaling.

For color options, the boxtop shows the two schemes included: either overall gray or a green and brown camouflage. The two overall gray options are both from the 2nd Air Battalion in China, 1937. The first is Lt Kawahara's plane, featuring three red stripes around the fuselage. The second is Capt Tateo Kato's plane, and it features a broad yellow stripe around the fuselage. These stripes are provided as decals, but could be painted on if you so wish. The final option is from the 77th Flight Regiment in 1939 and is camouflaged green and brown over gray. It has a yellow band on the tail with black chevrons.

This is a welcome re-release of the ICM kit, and with two in the box with matching markings, it will make for a nice instant diorama for a 2nd Air Battalion operational scene in China. My thanks to Hasegawa USA for the review copy.