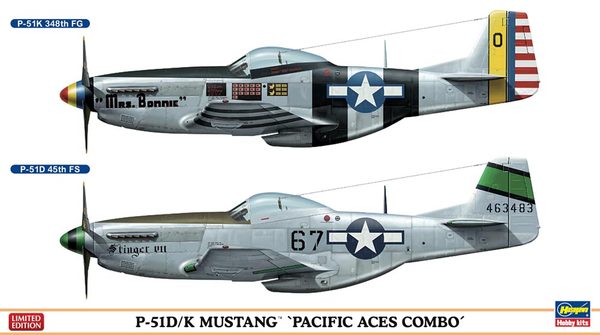 Few aircraft are as ubiquitous as the North American P-51 Mustang. A major fighter aircraft during the Second World War, the Mustang saw extensive usage post-war around the world, and dozens continue to fly today on the warbird circuit and as air racers.

This is the classic 'new' tool Hasegawa P-51D Mustang kit, dating back quite a few years and featuring recessed panel lines and overall good, if somewhat basic, detailing. As this is a combo kit, you get two complete Mustangs in the box, and the decal sheet provides three marking options.

Jumping into the construction, the instructions start out with the interior. This is simple, yet busy enough for a closed canopy. There is a one-piece floor that includes all the bits and pieces behind the seat. The seat is separate, as is the control column and instrument panel. A decal provides the details for the instrument panel, but you will have to source your own seat belts, as none are included in the kit. The sidewalls have some shallow detail that will look good enough with some careful drybrushing. For those who want to display the canopy open, updating the interior with a resin replacement will significantly improve the looks here.

While still dealing with the fuselage innards, there are separate exhaust stacks that are fitted into the fuselage halves, as well as an insert for the cooling flap area. With all that in place, you can close up the fuselage halves. This kit has the vertical fin molded on one fuselage side, which will leave a bit of a gap to deal with on the other side. While this can be a bit tough to deal with, it does result in a thin trailing edge on the rudder, so I am willing to put up with the extra touch up work there.

Moving to the wings, it is here that we come across what I find to be the most visible problem with the Hasegawa P-51 kit: the wheel wells. These are molded integrally to the one-piece lower wing section, and while they have good interior detailing, they are far too shallow. Your choices in fixing this are limited to either replacing the wells entirely, attempting to correct the kit parts, or try some creative painting to mask the shallowness. Of course, this problem can be minimized by gluing the model to a base, or completely eliminated by building the model gear-up and in flight.

Assembling the wings is simple, and while the instructions have you add the upper wing halves first and then joining the finished wing to the fuselage, I would recommend putting the lower wing on the fuselage first, and then add the upper wing halves. That process will help minimize any wing root gaps. The landing gear is nicely done overall, with good interior door detailing. Be prepared for filling some ejector pin marks on the tires, though. The kit also comes with two styles of underwing drop tanks, as well as two types of propellers and two types of canopies. With all of those sorted out, it's time to paint.

Mustangs in the Pacific were pretty much all natural metal, so break out your silver paint for these two. The decal sheet, as noted, provides three colorful options. Going out of order, I'll mention the second choice first, and that's "Stinger VII" from the 45th FS, 15th FG. This plane has green bands on the wings and tailplanes, making for a pretty colorful P-51. The bands are provided on the decals, so there's no worries about trying to find a paint match for the green. However, getting those bands to fit around the subtle curves could be a bit of a challenge.

The other two choices are from the 348th FG, and are finished similarly with large black bands around the wings and fuselage. The first one is "Mrs. Bonnie", flown by Maj Bill Dunham, while the second is "Sunshine", flown by Lt Col William T. Banks. Both have scoreboards under the canopy. "Mrs. Bonnie" has a red, white and blue rudder, while "Sunshine" has a yellow rudder. Since this box comes with two kits, finishing them both in markings from the same unit will make for an interesting display pair. The decals include quite a bit of stenciling as well, so your finished Mustangs will look quite nice once all the decals are on.

This is a nice boxing of the Hasegawa P-51 with great decal options. Having two in the box can make for some fun building, as doing two of the same kit simultaneously goes surprisingly quick. I'm looking forward to adding these two Mustangs to the display shelf. My thanks to Hasegawa USA for the review sample.