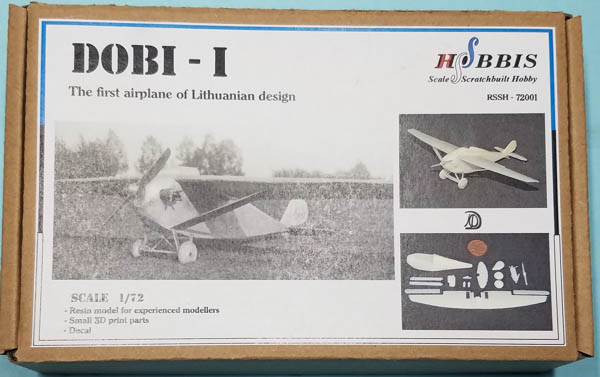 One thing I truly love about this hobby is learning about new things. There are aspects of aviation that not everyone can know about. Case in point for me personally: Lithuanian aviation. Of course I believe that aviation was something everyone all over the world would be interested in. I had no knowledge of just what was happening in Lithuania in the 1920-1930s and all the indigenous designs.

So when I discovered that Hobbis was creating models of early Lithuanian-designed aircraft, I knew I had to acquire one of their models, so this DOBI-I was delivered.

Taken from the site History of Lithuanian Aviation 1919 - 1940, with translation provided by Google:

"Lieutenant Jurgis Dobkevičius, the commander of the 1st Squadron of the Lithuanian Military Aviation, built his first plane privately and with his own funds, so there were no documents in the archives of the Military Aviation about the construction of this plane."

"DOBI-I - a single-seat microplane of wooden construction with a low-power engine. Already in this first design of his, J. Dobkevičius was aiming for maximum aerodynamic perfection, as much as it can be obtained from a kicking monoplane."

For a more comprehensive history on the DOBI-I, definitely visit its page on the aforementioned History of Lithuanian Aviation 1919 - 1940 site. This is the year of the 100th anniversary of this design.

The Hobbis 1/72 DOBI-I consists of 16 pieces of cream and white resin, and a decal sheet with three of the rudder emblems, an extra "just in case". The molding on this kit is exquisite and some of the best resin casting I have ever seen. The vanes on the engine cylinders are visible and to scale!

It appears the seat is to remain on its block and the entire assembly placed into the open cockpit of the one-piece fuselage. But, that's the only component included for the cockpit. There are drawings you can download from the above site that diagrams some instrumentation and a control stick. Hobbis molds the "bezels" for the instruments into the single-piece wing, but you'll need to source the dials yourself, or paint them in. I may add a control stick but since the rest of the cockpit is unknown, that would be it.

As I mentioned, this is a beautifully-molded kit and there isn't much you need to add. Push-rods and exhaust pipes for the two engine cylinders are about it, especially since the cylinders are right out in the open.

Building this kit won't take long. You have two options to finish it: "natural" or aluminum-doped. The aircraft was of wood and canvas construction so a wood-finish fuselage with clear-doped linen flying surfaces was how it was first flown. Later in its life the creator painted it in aluminum-dope. If you want to use the supplied decals than you must finish it in the aluminum-doped scheme.

Have I mentioned just how lovely this kit is molded? The producer has gone as far as filling in the clear-cellon (on the real aircraft) covered areas on the rear wing roots with a clear filling (so you'll need to mask these prior to painting). Everything is thought out and Hobbis is to be congratulated on an excellent model of a very unique subject. I am really looking forward to working on - and finishing - this wonderful model.

If interested in obtaining any of the Hobbis models, including this DOBI-I, email them direct at rss.hobbis@gmail.com.