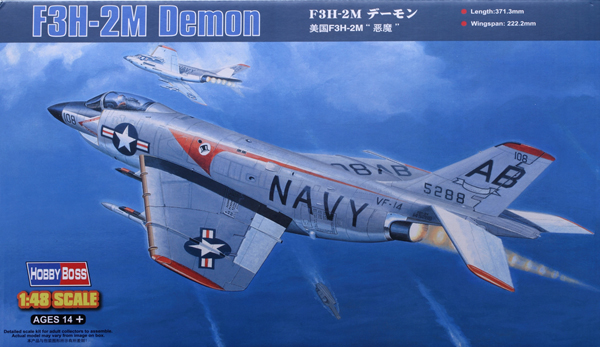 McDonnell's Demon was the predecessor of the famous F-4 Phantom.  Serious problems (primarily an unreliable and underpowered engine) plagued the F3H-1N and led to grounding and early termination of the program. The redesigned F3H-2N, F3H-2M, and F3H-2 Demons were better performers and provided useful service for the U.S. Navy from 1956 thru 1964.

The Demon's primary role was all-weather interception to protect the carrier task force. It was the first Navy fighter to carry the Sparrow air-to-air missile. The aircraft also had a ground attack capability with rocket pods and bombs. Although designed to have 4 X 20mm cannon in the forward fuselage, most Demons were fitted with only two cannon as a weight -saving measure. 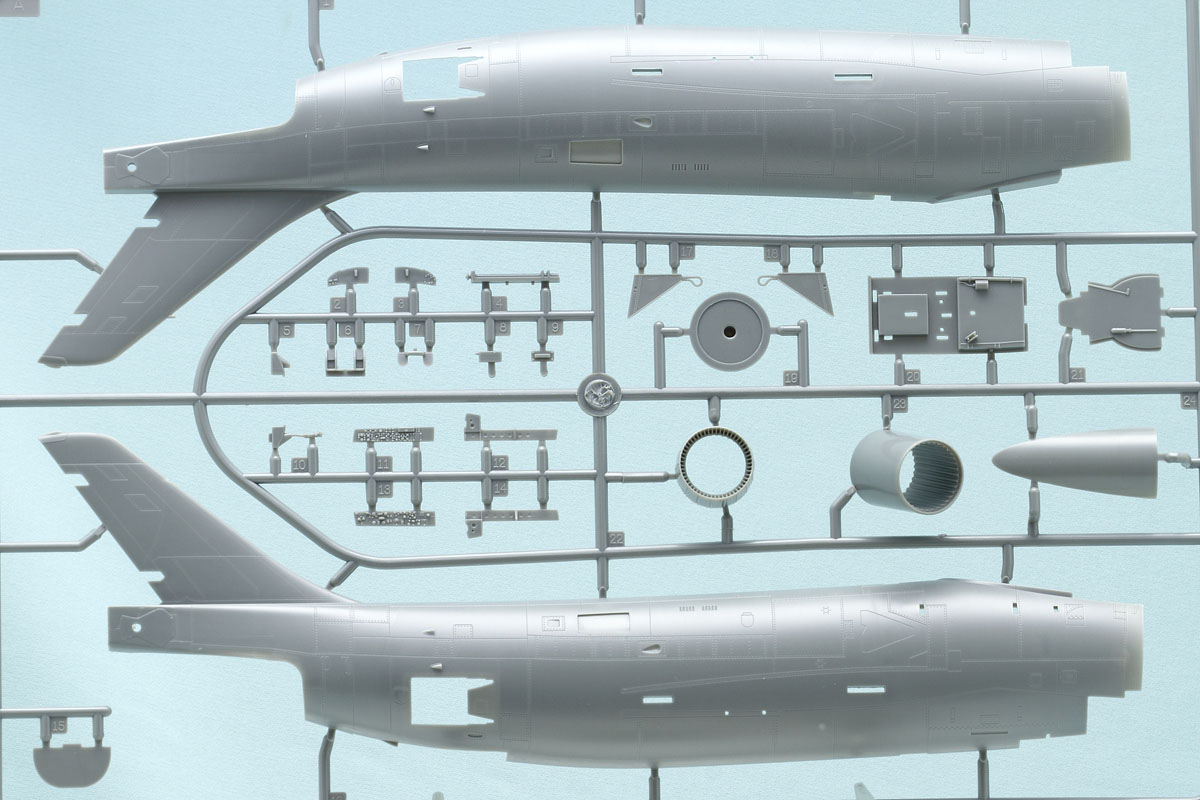 Modelers should carefully check their photo references and know which version they want to build before choosing the appropriate kit. 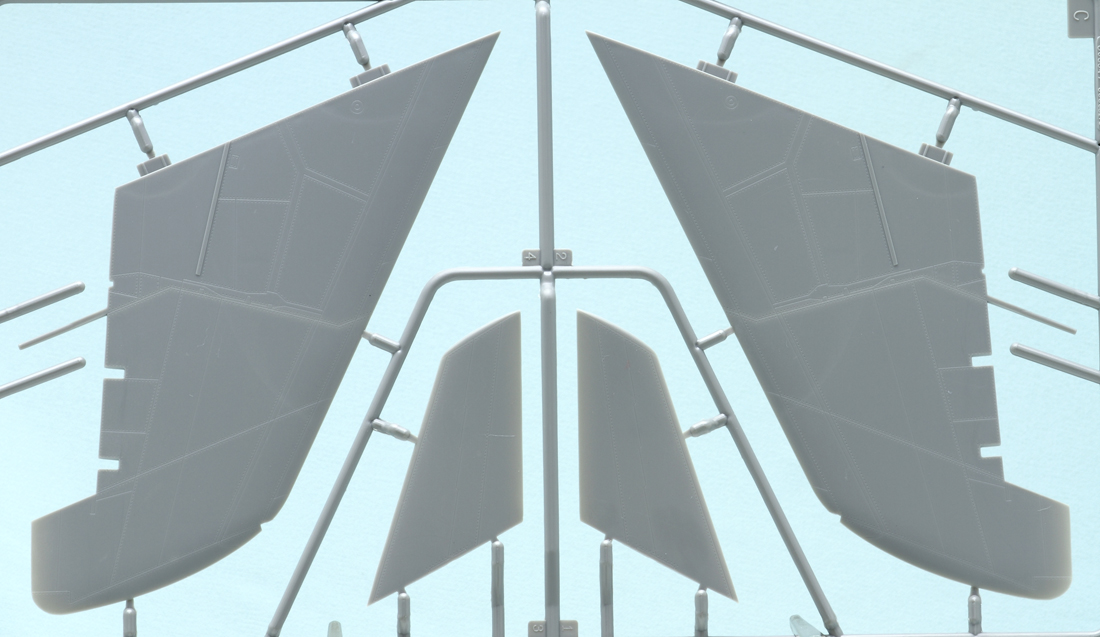 The part trees are well packaged in six individual bags plus two small bags for the clear parts. Inside the bags, some parts have extra protection with mini foam blankets or bubble wrap around them. In particular, the canopy and windscreen are each cocooned in their own blankets--a very good idea.

The parts have consistent recessed detail that is appropriate for the scale. Most of them are well-molded, although I noticed some slightly rough texture along the main fuselage halves top and bottom areas. Minor sink marks are present on the nose wheel doors.  Ejector pin marks are present on the wing fold insert parts and on the forward inside surface of each main fuselage half that serves as part of the air intake. 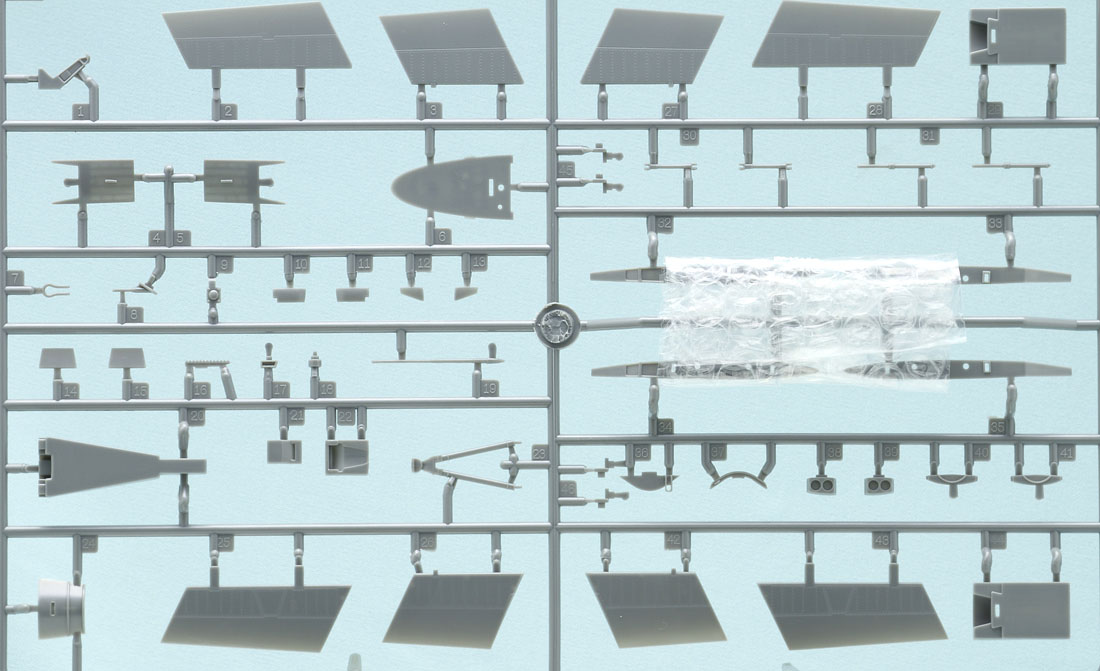 The fuselage parts are engineered in the normal way with left and right main fuselage halves, and ditto for the forward fuselage. Nose wheel well and cockpit sub-assemblies fit into the forward fuselage halves. There are speed brake wells (speed brakes can be installed in the open position), a tail hook well, and a jet exhaust pipe that go into the main fuselage. A separate rudder fits into the tail section.

The comprehensive cockpit features raised detail on the instrument panel and the console tops. The kit's multi-part ejection seat is the early McDonnell type. Later Demons were equipped with a Martin-Baker seat (available from aftermarket companies). The kit lacks a gun sight. 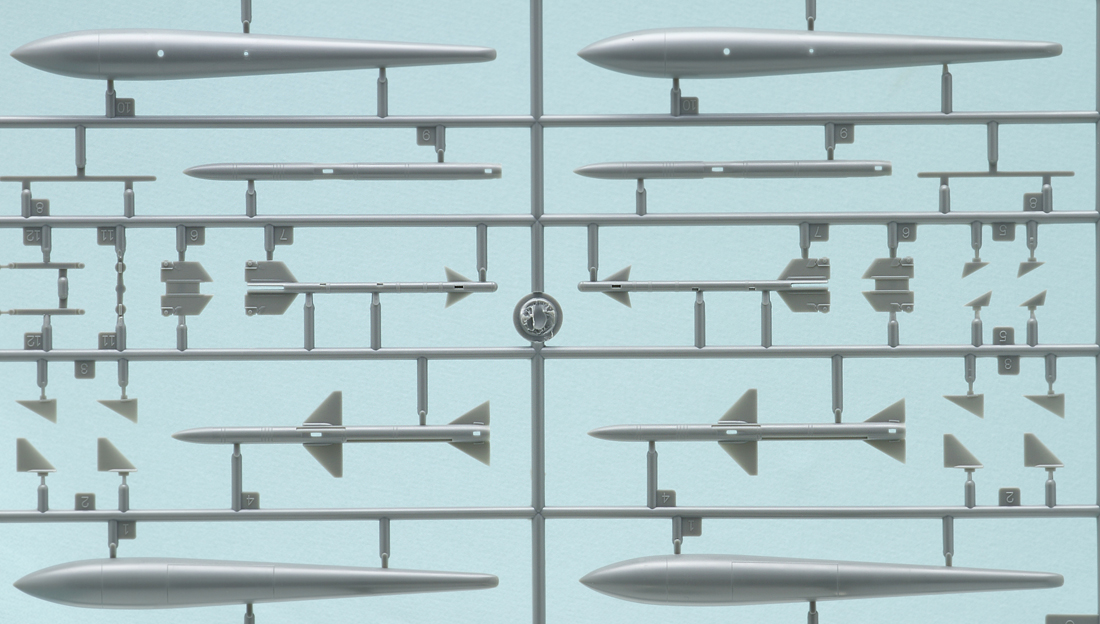 The wings and horizontal stabilizers are produced in top and bottom halves with separate main landing gear wells. The flaps and ailerons are separate pieces that are keyed to fit in the neutral position. An option for folded wings is possible: the outer wing sections would need to be cut along the indicated lines and the wing insert parts utilized.

Clear parts include the windscreen, canopy, dorsal beacon light, rear navigation light, and wing tip lights. All are nicely molded and have no scuffs or other imperfections.  However, the landing light and the carrier approach lights box are omitted from the kit. 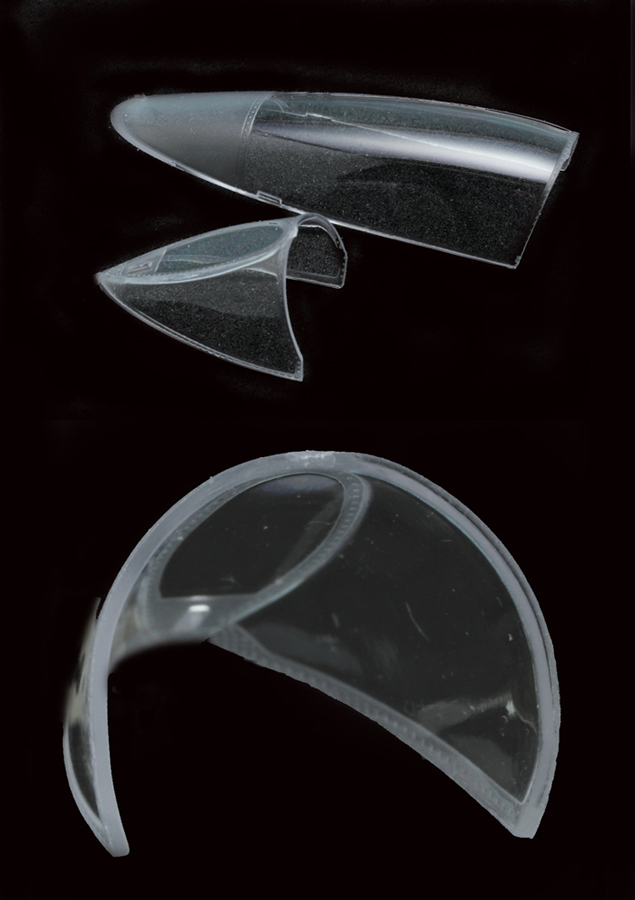 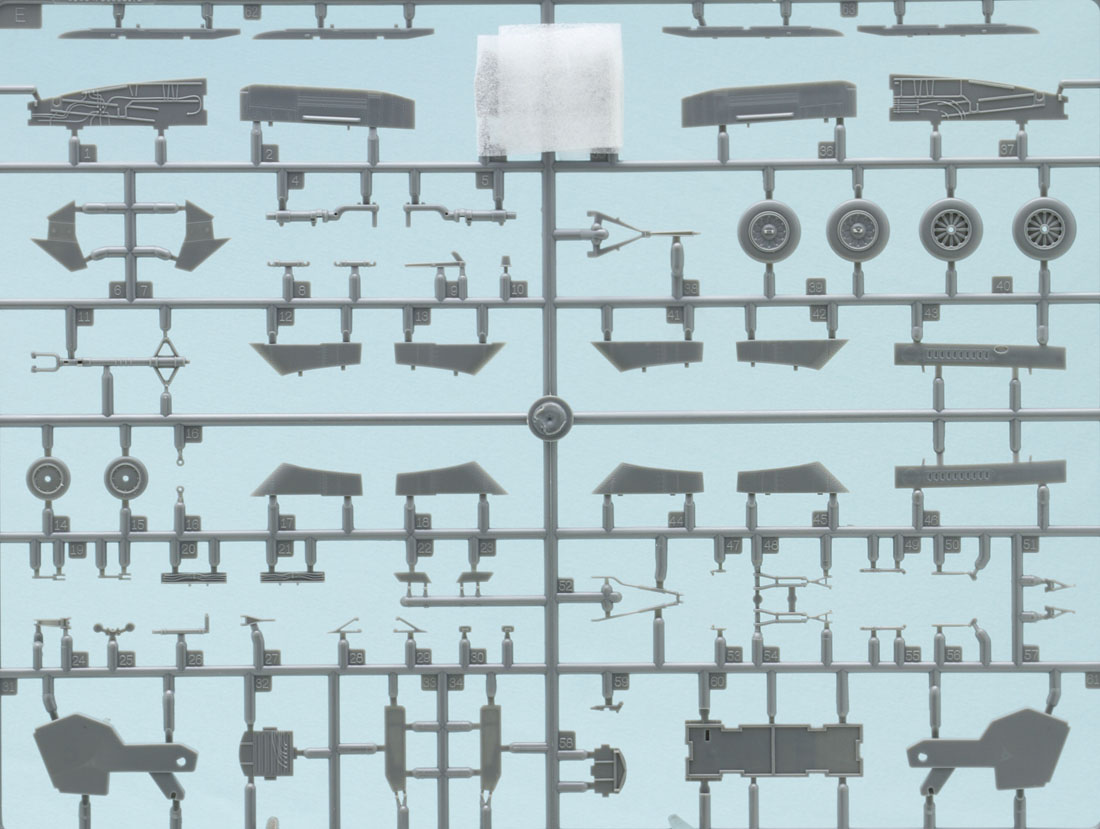 This kit has a photo-etched part tree with the following items: wing fences, spoilers, speed brake exterior panels, and turbine face for the engine exhaust.

The instructions are the typical exploded diagram style and they are easy to follow. A convenient parts map is also in the instruction booklet. A full color marking and painting guide is also included, with color call-outs listed for several brands of paint. 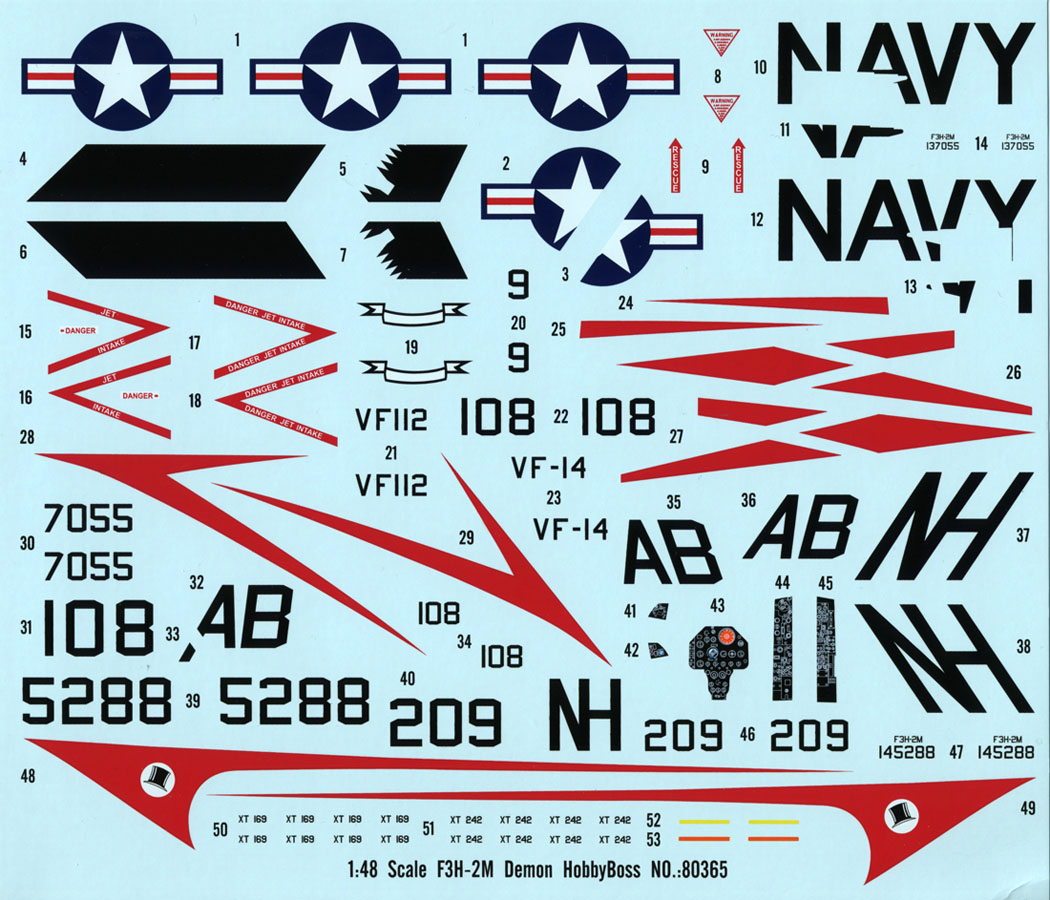 The decals appear to be of good quality and accuracy except for the white scroll of VF-14 (should be gray), and the instrument panel & console decals, which are not very realistic.

The two choices are:

I have a positive impression of this kit. As a fan of naval aviation, I am pleased to see a quality plastic 1/48th kit of the Demon. There are other neglected naval fighters like the Cougar, Tiger, and Banshee that need to be produced in 1/48th scale. Let us hope that the momentum continues.