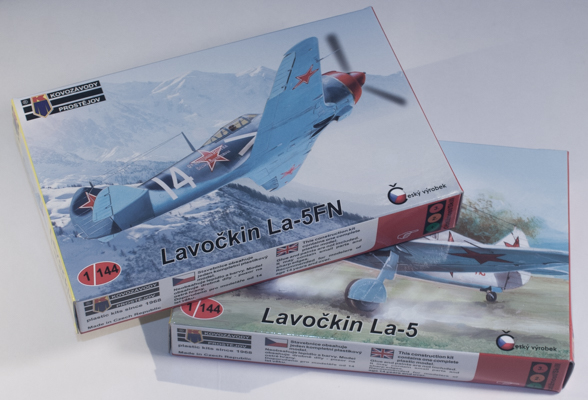 The Lavochkin La-5 was a further development of the Lavochkin-Gorbunov-Gudkov LaGG-3 by lightening the fuselage, adding a more powerful radial engine as well as other airframe enhancements.

Kovozávody Prostějov (KP) has released three different versions of the Lavochkin La-5: the "first" La-5, the La-5F with the cut-down rear fuselage, and the La5-FN with a better engine and then later, up-gunned. This review takes a look at the La-5 and the La-5FN.

Both kits are essentially the same, but not. While you would think KP would include two sprue, one containing the common parts, the other the different pieces, instead everything is on the same sprue (which means they have three separate molds, one for each version). Both the La-5 and La-5FN contains 25 pieces on the grey sprue and each has a clear sprue with four pieces on it (although they are different for each version). The way KP breaks up the clear pieces is interesting. If you want to build the kit with the canopy open KP provides the rear piece molded in conjunction with the sliding part. The clear parts are relatively clear but are somewhat thick – thankfully Brengun has released vac canopies for the kits.

The La-5 markings are for the "Valeriy Chkalov" squadron, which was an entire squadron of aircraft that were bought and paid for by the workers of the Gorkovskiy district:

The La-5FN has markings for these aircraft:

Now that the smaller pieces are all put together (and put somewhere you can remember where they are later – trust me on this) actual airframe construction can continue. First the seat (and clear armored glass behind the seat, if building the La-5FN) and control column  are added to the one-piece cockpit "tub", then it is glued to the center of the wing. Next the fuselage halves are assembled, being sure to trap the instrument panel between the two halves (although I wonder if it could be glued into the cockpit opening after the fuselage halves are assembled, which would ensure a good and accurate fit). Finally the next instruction step has you glue the one-piece wing to the built-up fuselage along with the horizontal tail pieces, cowl and upper nose piece (which will be one of the aspects that makes the La-5 different from the La-5F and La-5FN).

The rest of the instruction sheet has you glue on the wheels, landing gear door and clear pieces. Note that if you assemble the canopy open KP provides a completely unique way of doing so. On the La-5 it includes the smaller, rear windows as part of the canopy; on the La-5FN they include the rear part of the clear piece on the slider. However, in the case of the La-5 because of problems with the canopy some pilots tended to not fly with it at all so be sure to check your sources. Unfortunately, for the scale, I feel the clear pieces are too thick. Probably a limitation of the injection molded process but still. They're not bad clear-wise, but still a bit thick. Thankfully Brengun has released vacuum-formed replacements.

These are excellent first releases in 1/144 from KP. Not only do they look like La-5s but you also have the choice between the three main variants. If I was to complain, it would be with the thickness of the canopies and the lack of an engine and a choice of having the louvers opened or closed. But these are minor annoyances and should not stop you from picking up these kits. Now that we have photoetch from Brengun, vacuum-formed canopies from Brengun and a resin interior from RetrokiT will make these La-5s really stand out. In addition aftermarket decals have started showing up, but even so, KP has given us some great schemes in-the-box.

My thanks to Kovozávody Prostějov for sending these for review.