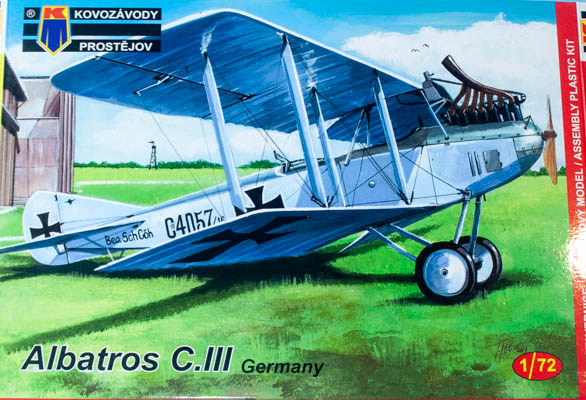 "The Albatros C.III was a German two-seat general-purpose biplane of World War I, built by Albatros Flugzeugwerke. The C.III was a refined version of the successful Albatros C.I and was eventually produced in greater numbers than any other C-type Albatros."

The last 1/72 model of the Albatros C.III I can remember was the injected molded kit by Meikraft. It wasn't a horrible kit, just a little thick in places without much of a cockpit, if memory serves. Now we have a more up-to-date release with this one from KP.

Decals appear to be nicely done and in register.

For this model, construction starts with building the engine. Out of the box it isn't bad and with adding even more detail can be enhanced, if that's what one wishes. It consists of four parts, including the exhaust stack, which needs its end to be hollowed out (but is best left off until painting is finsihed, but added prior to gluing on the upper wing). With the proper painting and drybrushing/washes the engine will actually look quite good.

Now it's time for construction to move to the usual place on an aircraft model, the cockpit. Out of the box it too looks very decent and only the studious will want to add more. While the kit comes with decal seat belts, that's one area I definitely will improve upon by adding some sort of photoetch. After painting all pieces, then you add the seat to the fuel tank (after adding the belts, of course) and that assembly to the floor, along with the control stick and separate rudder pedals. Finally the next construction step has you paint - and add decals - to the instrument panel.

The next step you build the "shelf" for the engine and add it - with the engine attached - to one fuselage half, along with the built-up cockpit. Also added is the seat for the observer in the rear cockpit and while the instructions show you put the gun on now, that's another item best left until the end. In addition, you may want to track down an aftermarket item, especially one with an etched cooling jacket. To my eyes, that always looks best when trying to fashion a model Spandau gun. Now you glue the fuselage halves together.

KP has you add the center struts at this point and I'm hoping there isn't any measuring needed and the upper wing will fit fine. Only during construction will that truly be seen.

The next major step has you add the tail surfaces, along with more items best left off until after painting: rear cockpit gun ring and gun; propellor; and radiator with its pipe.

Of the final steps in the instructions, the only one I would perform prior to painting is the addition of the lower wings. Everything else is best left until after painting and decaling: adding the interplane sturts followed by the upper wing and the extra radiator on top of the upper wing.

Unfortunately KP doesn't provide a decent rigging diagram so you're on your own for this.

This is an excellent rendtion of the Albatros C.III in 1/72. KP is to be commended to bring out this important aircraft of the Great War. It will look great when finished and sitting on your shelf. It's also great they used the most up-to-date research on "Dragodile" since many years ago only one photo of the aircraft existed so everyone thought the design on the port side was repeated on the starboard. We now know better and KP is to be thanked for using this up-to-date information.

I definitely thank Kovozávody Prostějov for the review model.