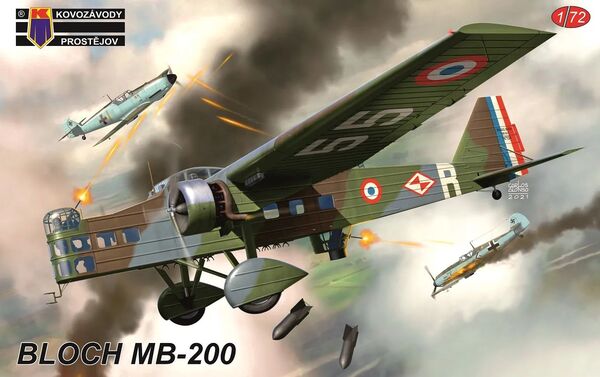 "The MB.200 was a French bomber aircraft of the 1930s designed and built by Societé des Avions Marcel Bloch. A twin-engined high-winged monoplane with a fixed undercarriage, over 200 MB.200s were built for the French Air Force, and the type was also licence built by Czechoslovakia, but it soon became obsolete, and was largely phased out by the start of the Second World War."

According to Scalemates, the Kovozávody Prostějov (KP) kit of the Bloch MB.200 initially was released in 1985 and has gone through a number of iterations. According to the modeling site of KP/AZ: "The original model (forms) of the Aero MB-200 has undergone several changes over time. It was supplemented by differential parts for the original French version with different armament, engines and a modified bow of the fuselage. Clear parts have also undergone many changes. Now we have decided to return this original KP model in a new form to the offer program. Parts from new molds will be on sale for both versions, ie for the Aero MB-200 and Bloch Mb-200. After the molds have been revised, the moldings are made of medium-gray-blue plastic and the parts are nice and clean, apart from a few sprays."

Decals are nicely printed but the truth lies in the application. I definitely hope these decals adhere well and don't shatter. Important note: the instructions contain a correction for the placement of markings on the Czech aircraft so pay attention to the instructions when you're ready to apply the decals.

This is a large plane so there's no surprise there are a lot of parts to it. Take your time and you'll have an excellent looking Bloch MB.200 added to your shelves.

Construction starts with assembling the nose which consists of mostly clear parts. I picked up a set of Eduard masks for the kit - which is highly recommended, given the number of clear parts - and I hope they can be used to mask the inside of the windows to spray the interior colors. The next steps have you glue the magazines to the guns followed by assembling the engine nacelles. Note the instructions show various items on parts that need to be "modified", including cutting away some of the molded-in detail on the cockpit floor. Now the wings are assembled again, paying attention to the instructions showing holes to drill.

Now construction moves to the cockpit and assembling the fuselage pieces together. Thankfully KP provide color call-outs for the interior and the interior appears to be decently populated. I have a Brengun photoetch set coming for the kit and at a later time I will detail what's on that set. Now that all the interior parts are on the floor of the fuselage the sides and top are glued to it, creating the rear section of the fuselage.

The next instruction step is the largest, having you add everything to the fuselage assembly including the nose built up first; wings; tail parts; engine nacelles and engines (best left off until after painting); the canopy and nose and mid-section gun turrets; and other small parts. The model gives you the option of leaving the door to the cockpit open and adding a set of steps.

The rear turret is now assembled along with the nose radar antenna and bombs, those being in halves. The landing gear is now added, possibly best left off until after painting.

The last step on the instructions has you add the bombs to the underside of the model, which should be left off until after adding the decals and final painting.

The KP 1/72 Bloch MB.200 is a large model! Even with its age it's still a very viable kit and will look great once built up. I mentioned the Eduard masks and Brengun photoetch already, but I also plan on sourcing aftermarket engines for my build as well.

I definitely send my thanks to Kovozávody Prostějov for the review kit.