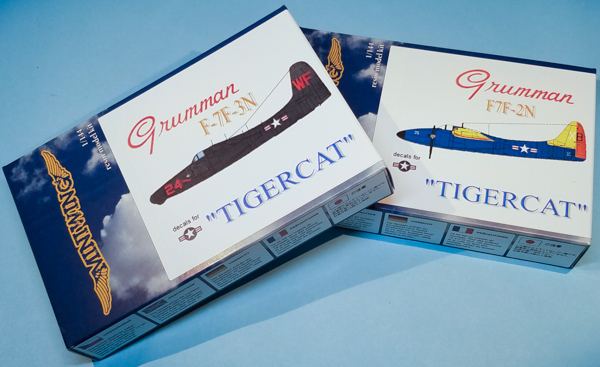 "The Grumman F7F Tigercat is a heavy fighter aircraft that served with the United States Navy (USN) and United States Marine Corps (USMC) from late in World War II until 1954. It was the first twin-engine fighter to be deployed by the USN. While the Tigercat was delivered too late to see combat in World War II, it saw action as a night fighter and attack aircraft during the Korean War.

"Designed initially for service on Midway-class aircraft carriers, early production F7Fs were land-based variants. The type was too large to operate from older and smaller carriers, and only a late variant (F7F-4N) was certified for carrier service."

Miniwing has recently re-issued their 1/144 Grumman F7F Tigercats, both the F7F-2N and F7F-3N. We reviewed the F7F-3N when it was initially released.

Everything is exactly the same as they were initially released, except for one small, important area on the F7F-3N: the fuselage halves are complete, meaning that they both have a "full nose". When the kit was first released, the nose was "cut off" the fuselage halves, where you would put the separate nose to make the -3N. Now you need to figure out where the nose should be cut so you can add the separate nose. Nothing is written on the current instructions so you'll need to find your own references on where the cut should be made. Thankfully Don Joy (whom did the First Look on the -3N when it was initially released) still had his kit instructions so hopefully those - attached below - will help with making the cut.

Otherwise the kits are the same as when first released. I'll refer you to the older First Look on the -3N for that one (and know there are no molding flaws on this release that were discussed in that article). Here are the marking options for the F7F-3N:

The construction sequence for the F7F-2N is mostly the same as the F7F-3N, especially since now the instructions are exactly the same. Add the seats to the cockpit and then the fuselage halves can be assembled. Unfortunately these releases don't have the otherwise "usual" instrument panel and seat-and-seat-belt decals to add to the cockpit. Now the rest of the model can be glued together: vertical and horizontal tails, wings, nacelles, everything to make the model look like a "true" aircraft.

The following are marking options for the F7F-2N:

Since these are the only Tigercats I'm aware of in 1/144 you definitely need to pick these up if you want to build F7Fs. Even so, they are definitely some of the best resin Miniwing puts out and will look great once built.

My thanks to Miniwing for the review kits.