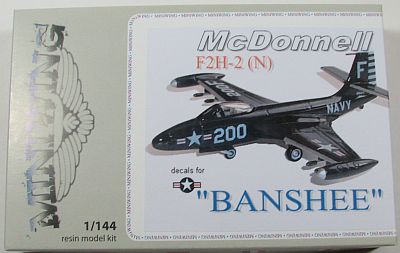 Hot on the heels of their F2H-3, Miniwing has just released a 1/144 F2H-2/2(N). The kit can be built as either the “straight” F2H-2 or “converted” into the F2H-2N with the supplied, separate nose. Sure you’ll have to perform a little bit of surgery, but if care is taken it shouldn’t be too difficult to cut off the nose from the fuselage and add the -2N nose.

For the cockpit there is only a seat, and the decals for the instrument panel and seat “cushion/belts”. You can either paint the seat separate, or glue it into the cockpit prior to, but once that’s in there is no more to be added to the cockpit. I’ll probably add a control column, though.

The rest of construction goes quickly. Add the wings (and there will be little to no seams in this area due to the wing being added into a recess) the horizontal tails, and then the tip-tanks, and you have most of the F2H-2(N) finished. If building the -2N then chop off the -2 nose and add the -2N separate one. Since the aircraft the decals are catered for were overall Dark Sea Blue, you could also add the weapon pylons prior to painting. I would also add the canopy and mask it prior to painting as well.

Once painted, then add the landing gear, separate the nose gear into two halves and all gear doors. And now you have yourself a 1/144 Banshee.

One thing. In looking at pictures on Miniwing’s site, it would appear their Banshees are tail-sitters. If you’re building the -2N you could hollow out the separate resin nose and pack with heavier material. Not sure how to work this if building the “straight” -2. Miniwing appears to have a rod in the back of the fuselage – maybe build a tail-hook out of metal and have that support the tail. It would look better than just a piece of support “rod”.

One thing Miniwing has wrong is the placement of the nose gear. Not sure how it was changed from the F2H-3 (which has it in its correct place) but the Banshee's nose gear should be toward the front of the gear well. Just fill in the hole at the back of the gear well and make a new one at the front. That's all you need to do.

All in all another excellent release from Miniwing. Coupled with the previously release F2H-3, this 1/144 F2H-2(N) is nicely molded and will look great when finished. You’ll need to pick up two, though, to build both the F2H-2 and F2H-2N.

Huge thanks to Miniwing for sending this Banshee to us for review.