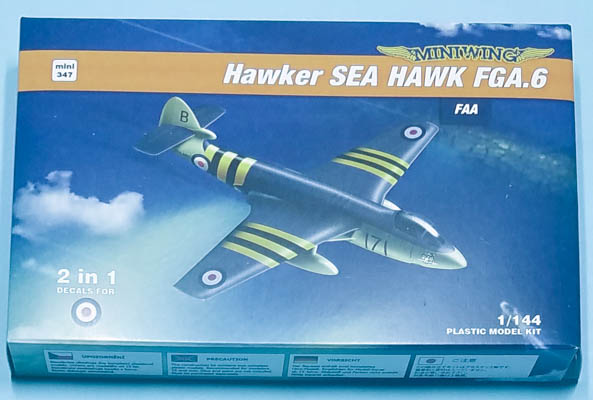 "The Hawker Sea Hawk is a British single-seat jet day fighter formerly of the Fleet Air Arm (FAA), the air branch of the Royal Navy (RN), built by Hawker Aircraft and its sister company, Armstrong Whitworth Aircraft. Although its design originated from earlier Hawker piston-engined fighters, the Sea Hawk was the company's first jet aircraft.

"Following acceptance in the RN, the Sea Hawk proved to be a reliable and sturdy workhorse. A considerable number were also produced for the export market and were operated from aircraft carriers in Dutch and Indian service. The last operational Sea Hawks, operated by the Indian Navy, were retired in 1983."

The Miniwing 1/144 Sea Hawk FGA.6/Mk.101 consists of 30 pieces of gray, injected plastic and a single injected clear canopy. There are two kits in this boxing. Decals exist for the following Sea Hawks:

Decals are nicely printed and appear to be in register. Also included are decal seatbelts - perfectly presentable in 1/144 - and decal instrument panels, although not shown in the instructions.

The instructions cover both versions of the Sea Hawk - FGA.6 and Mk.101 - with the parts difference being the rear section of the fuselage/tail. This boxing has markings only for the FGA.6 so you'll be left with extra parts.

The first instruction step is adding everything inside the lower fuselage/wing section, such as engine exhausts, intakes, main landing gear well and cockpit details. Unfortunately there are no color call-outs for the cockpit so you'll need references for that. Since the canopy is on the thick side and unless you cut it to display it open, everything for the cockpit provided by Minwing is perfectly adequate.

Construction now moves to adding the forward upper fuselage section; gluing the tail halves together (depending on the version being modeled) and gluing that to the fuselage/wing assembly; then adding the canopy, after masking, of course. Unfortunately Miniwing doesn't provide masks but Peewit has them in their range.

I definitely thank Miniwing for providing the review sample.