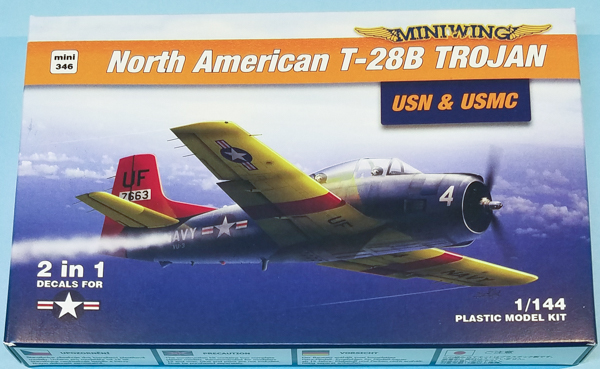 I've reviewed the first releases from Miniwing of their T-28s a few months back so refer to that article for what the kit contains. This release comes with the following markings:

The decals are very nicely printed and appear to be in register. One thing I don't understand, though. The USN bird has black-painted propeller blades with white tips and a red stripe in the white. Miniwing doesn't provide that red stripe as a decal so you're left to yourself either hand-painting that stripe, or finding a decal alternative. In addition, while Miniwing does provide decals for the instrument panels, they don't include seat belt decals, something they've done in the past. So again, you're left on your own to source that.

But even with those small complaints, this is definitely a kit worth tracking down and building. I've seen some really nicely built Miniwing T-28s on the 'net. Keep in mind that RetroWings has released a resin cockpit for it, along with a replacement nose for the T-28B.

My thanks to Miniwing for the review.