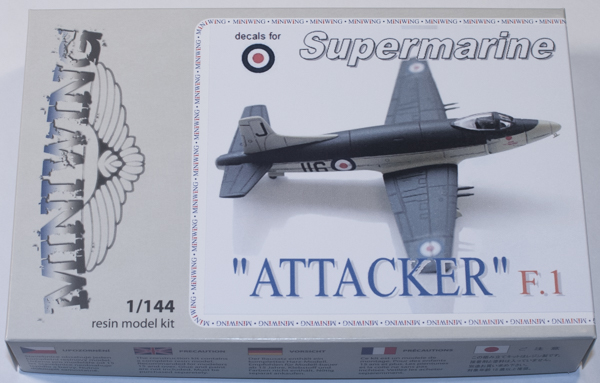 The Supermarine Attacker was a British single-seat naval jet fighter built by Supermarine for the Royal Navy's Fleet Air Arm (FAA). The type has the distinction of being the first jet fighter to enter operational service with the FAA. Like most other first-generation jet fighter, it had a short service life due to the rapid development of increasingly advanced aircraft during the 1950s and 1960s.

The Miniwing 1/144 Supermarine Attacker F.1 consists of 24 cream-colored resin pieces, one clear resin canopy, one vacuum-formed canopy, a photoetch fret with two pieces for the FB.1 (the fret contains more because it will also be used for the upcoming FB.2 release) and a small piece of plastic rod to be used for the wing probes. Decals, printed by JBr Decals, are for the following aircraft and are nicely printed and in register:

Both are finished with Extra Dark Sea Grey on the tops and Sky on the undersides.

This is another easy-to-assemble kit from Miniwing. The biggest headaches  will be adding the four separate cannon to the wing and the photoetch antennas, as the rest of assembly will go fast. My plan for this one is to glue on the flying surfaces first and then worry about the cockpit. I think it will be easier to handle that way.

I've had the fortune of seeing Miniwing kits from when the company first started. With the recent inclusion of JBr Decals and photoetch they have become top-notch kits, the best resin ones around. If you haven't picked up a Miniwing kit to build, the Attacker would be a great one to get your "feet wet". Only the photoetch antenna and separate cannon would be the only slow-down points with this build.

My humblest "thanks" to Miniwing for supplying the review kit. Note the kit can be purchased - with free shipping - at Kits-Shop.