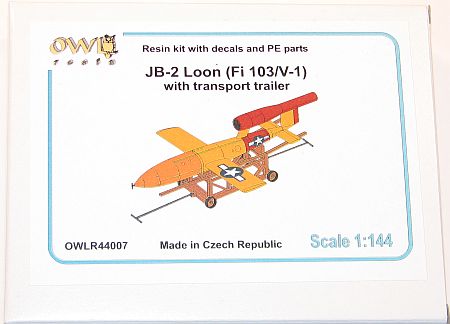 Decals are nicely printed – small – and in register.

Not too many kits are this easy to assemble.  Glue the wings and stabs to the main body, then after you decide which photoetch intake to add to the engine, glue that to the body.  And now you have a 1/144 Loon.  Actually, you may want to hold off gluing the engine on until after painting, assuming the fit is decent enough (except maybe on the first examples, since they were Olive overall).  I would definitely wait until after painting before gluing on the very small prop on the nose.  If you plan on using the trailer, then I would paint all pieces first, glue it all together, then do touch-ups after assembly.  It would be too small to assemble first then try to cover it all in a wood paint.

Since I received the Miniwing V-1 a year or so ago, I thought I would compare the two.  Overall I think the Owl kit has more finesse.  The details are molded better and cleaner.  The Owl kit comes with photoetch while the Miniwing does not (the photoetch only used for the engine intake).  Both kits come with a "transport trailer" and the same holds true with the Owl trailer – it's a little finer with better detail.  In addition, looking at the photo of the fuselage/engines side-by-side you can see the Miniwing engine looks "thinner" than the Owl.  Looking at photographs, the Owl engine appears to be more accurate.  In my opinion, the Owl kit is better than the Miniwing kit.

There are lots of possibilities one can accomplish using this kit.  Using photographs of the ground-launching of JB-2s in the US you can construct a small vignette showing that using the Owl 1/144 JB-2.  You can also construct a small display showing how the US Navy equivalent looked like on the subs that launched her – the USS Cusk and the USS Carbonero.  If you're feeling really ambitious, you could build a B-17 or B-29 and hang the JB-2 underneath one of those aircraft's wings.  Or you can just assemble the "transport trailer" and put the finished Loon on that.  You're only limited by the pictures you can find that the amount of imagination employed.

Huge thanks to Owl for the review Loon.