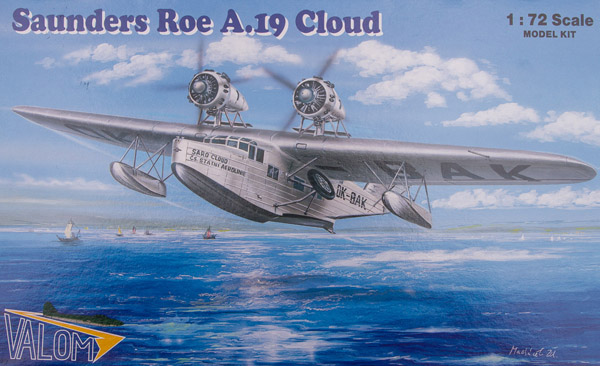 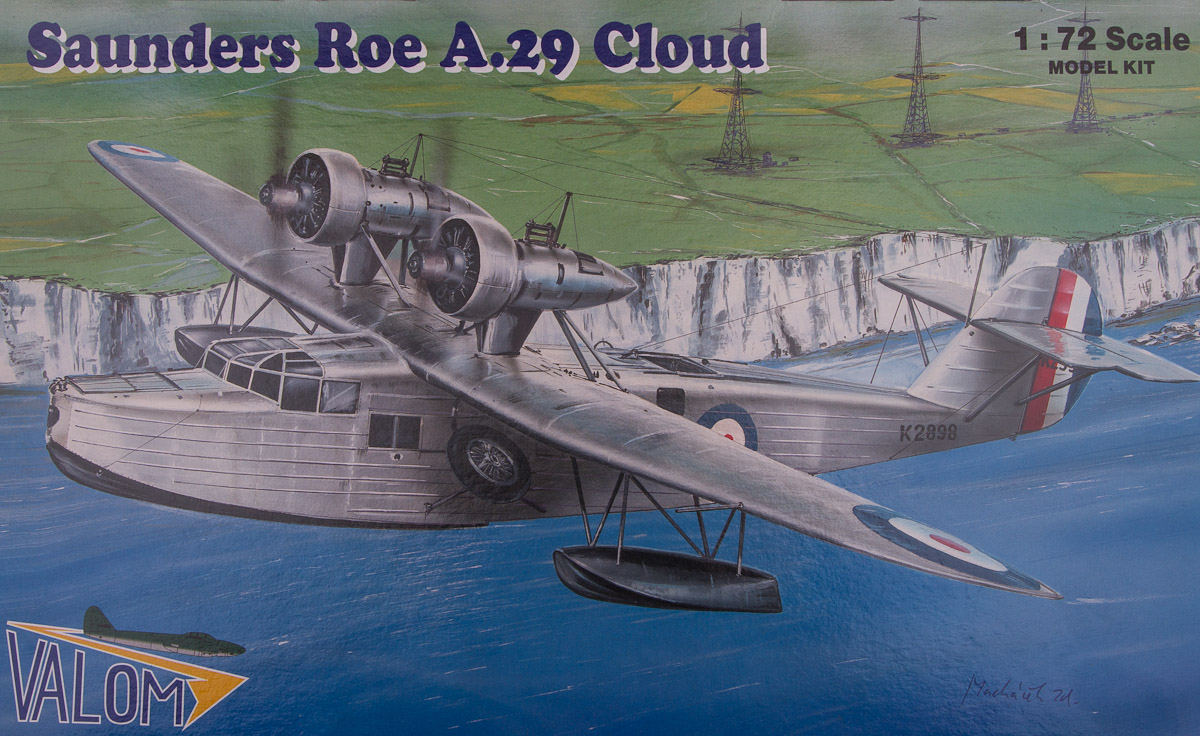 Saunders Roe was well known for producing flying boats. The A.19 Cloud was a development from the A.17 Cutty Sark, enlarging that previous design to incorporate a crew of two and eight passengers. The plane first flew in 1930, and sixteen production aircraft were ordered by the Air Ministry for use as pilot and navigator training. 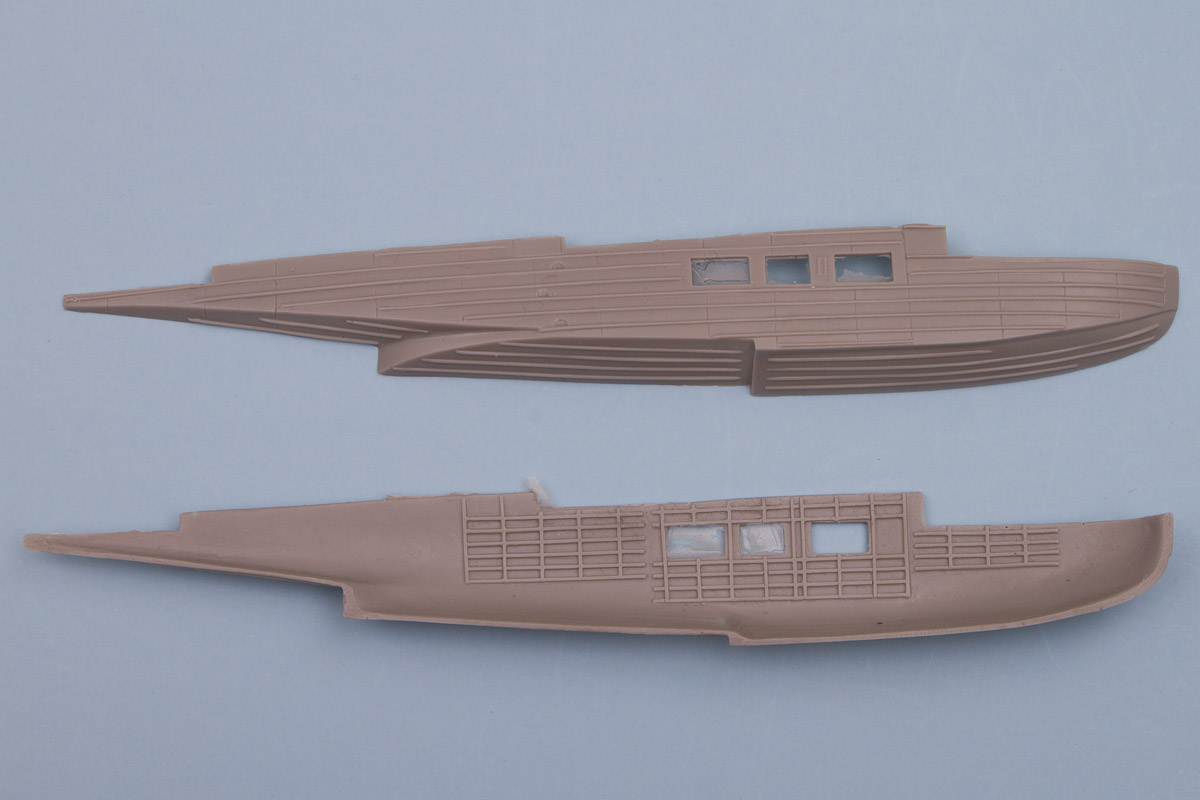 Valom has released two kits of the Saunders Roe Cloud: the A.19 and the A.29. The A.19 denotes the handful of prototypes and special variants, while the A.29 was the production variant for the RAF. The differences are minute, and both kits share identical plastic parts. Each kit comes with two sprues of plastic parts and a bunch of resin parts and details, including the fuselage halves. There is also a small fret of photoetch providing some of the finer detailing. The decals for the A.19 provides two civil marking options and the A.29 has a pair of RAF aircraft. 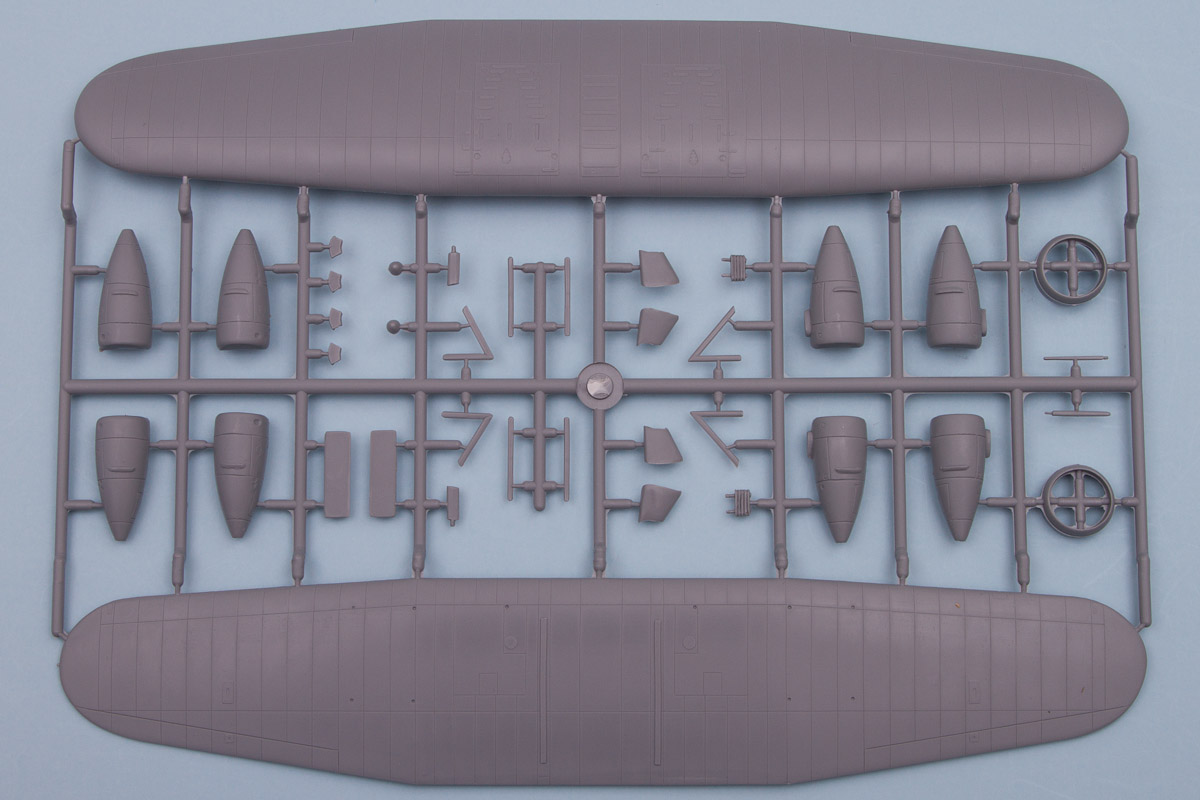 Construction begins with the cockpit and cabin area. This is built up from a combination of photoetch and plastic, with photoetch providing the instrument panel, seat belts, and control wheels. The cockpit and cabin floors are separate, connecting via bulkheads. The interior of the resin fuselage halves feature molded-in detailing, and it looks like the completed interior will fit well into the notches provided. 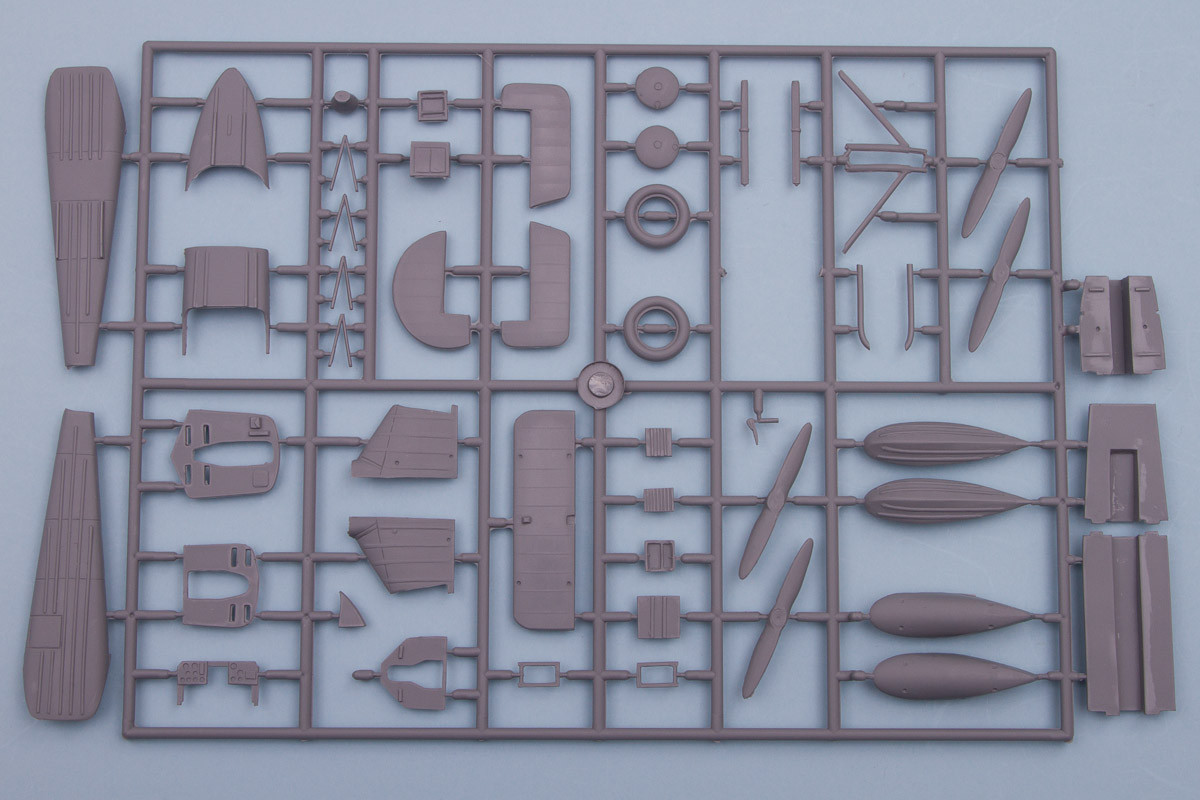 Moving on to the exterior, the engine nacelles are separate, with two styles provided. The A.19 kit has multiple engine options, as that aircraft flew with either Wright J-6 or Armstrong Siddeley Serval III engines. The strut pieces are delicate, but there is a large center pylon, so the attachment to the top of the wing won't be too flimsy. The floats are made up from two pieces, split into upper and lower pieces. This results in excellent detail on the float bottom, with minimal seam work to deal with. 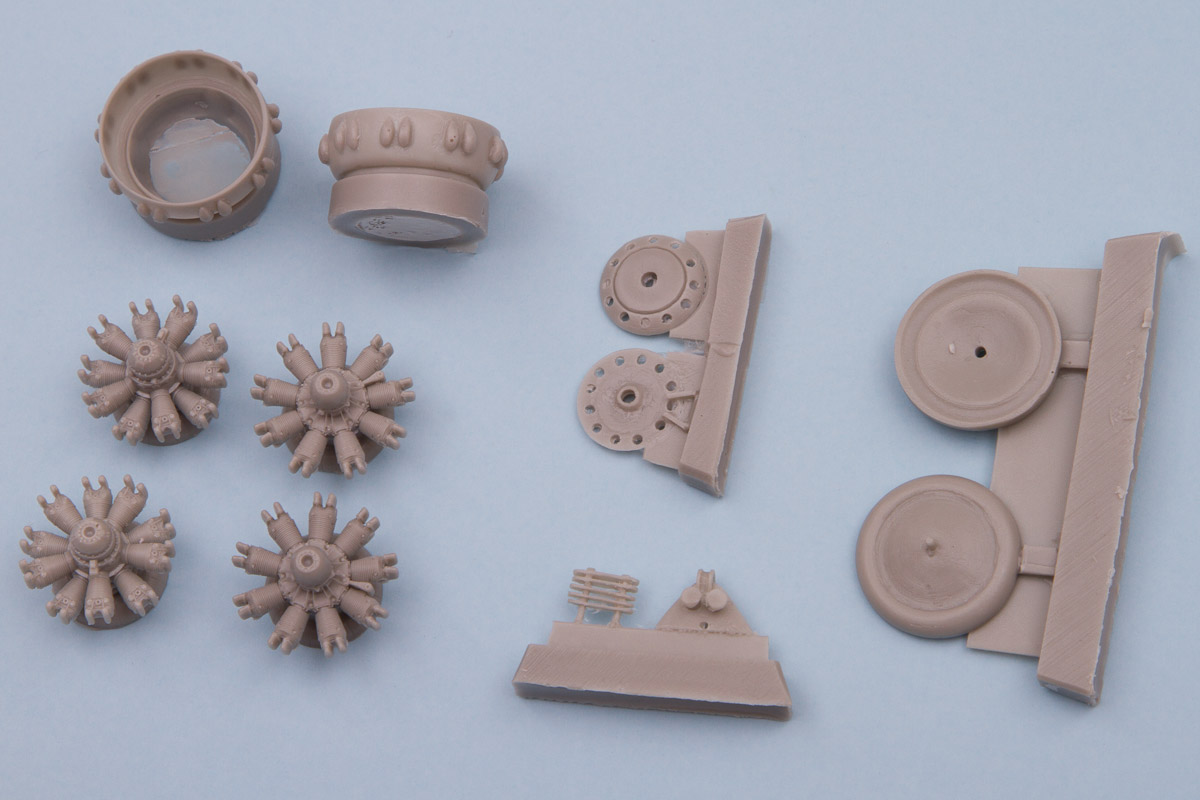 The landing gear is rather nicely done. The wheels are made up from photoetch, and there is a two-part press that will bend those photoetch pieces into the right shape. These then fit into the one-piece wheel, with a resin back plate. The end result will be a very nice looking wheel assembly, which then fits onto a one-piece strut. The completed landing gear then attaches to the completed fuselage and wing assembly. 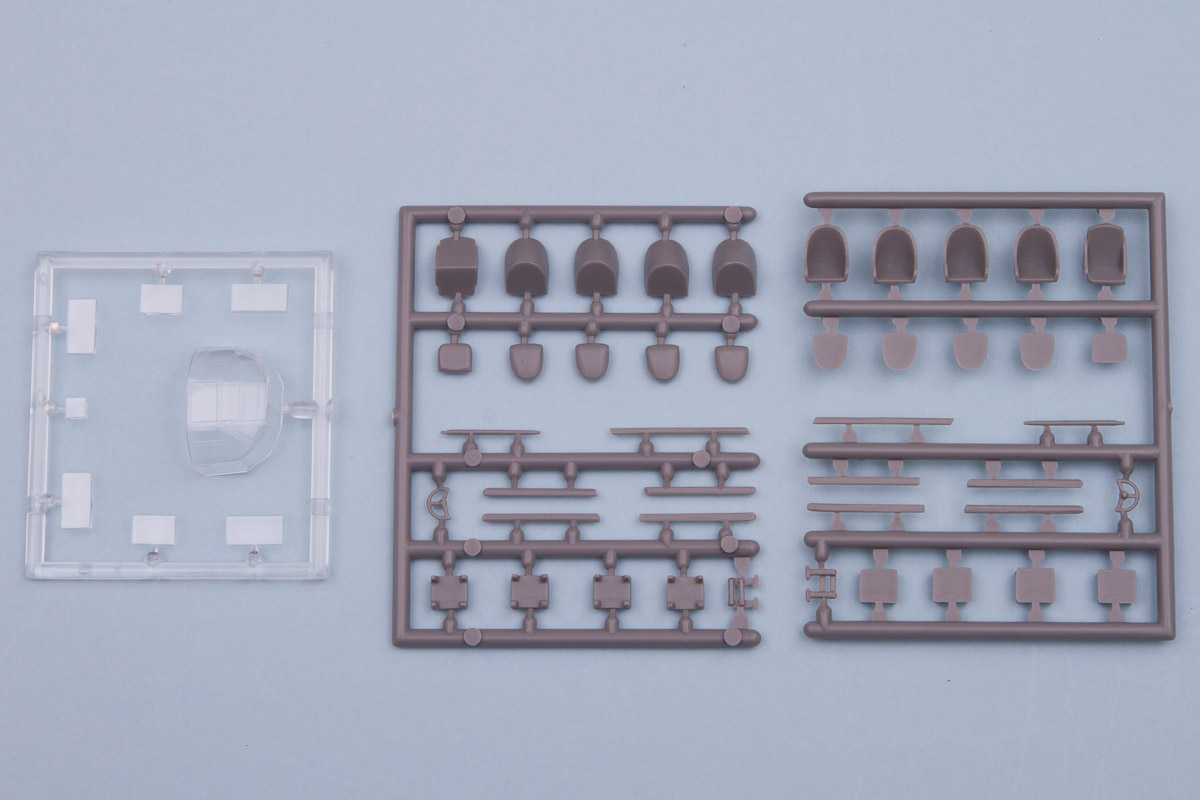 For fuselage details, there are photoetch pieces to fit over the kick steps on the starboard fuselage. This is the only difference between the A.19 and A.29 fuselage halves: the location of those kick steps. The upper fuselage is made up from plastic parts, and these differ between the variants as well. The wing is split into upper and lower halves, and fits into an opening in the upper fuselage. The breakdown of the whole airframe assembly suggests that filler work will be minimal. 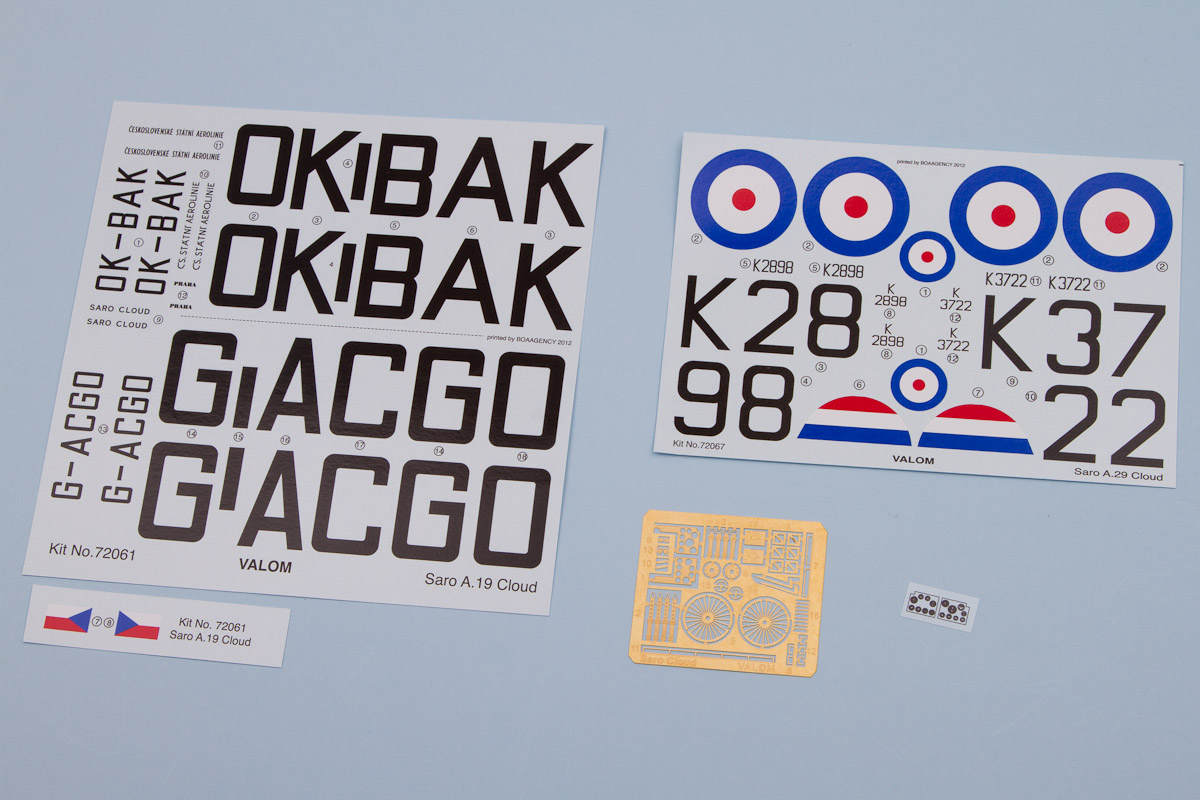 For decals, the A.19 has two civil options. The first is OK-BAK, the Czechoslovak State Airline option. This is the A.19/5 and was initially powered by Armstrong Siddeley Serval III, but was later re-engined with Walter Pollux radials. The markings consist of the Czech flag on the tail, civil codes on the fuselage and wings, and Czech State Airline titles on the nose. The second option is G-ACGO, which is the same A.19/5 aircraft but as originally registered in Britain.

The A.29 kit has two RAF examples, and the markings are pretty much identical in layout. These include RAF roundels on the fuselage and wings and tricolor stripes on the rudder. The only other markings are the serials, and the kit provides K2898 and K3722. The decals in both kits are nicely printed and should have no problem in application.

Valom has made a name for itself in producing kits of interesting but lesser known subjects, and these definitely fall into that category. It is very likely that these will be the only Saro Cloud kits we'll see in injection plastic, and in the box they look quite nice. If you are looking to add an interesting early 1930s aircraft to your shelf, check these out. My thanks to Valom for the review samples.