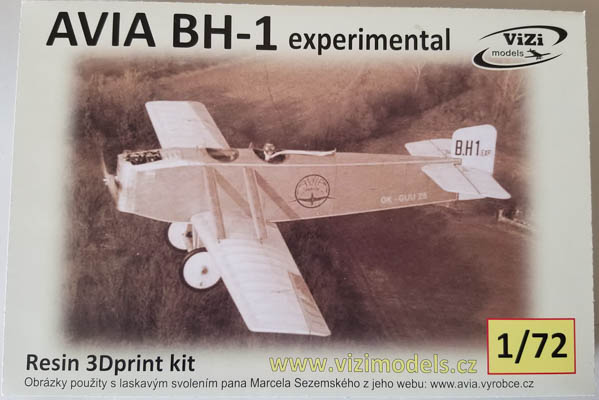 "The Avia BH.1 is the first powered aircraft design of the new Czechoslovak Avia company established as early as in August 1919 in Prague. The first acting partners in an venture called exactly „Avia – dílny na opravu a výrobu letadel" (ie. Avia – Aircraft Repair and Manufacturing Works) were the engineers Pavel Beneš and Miroslav Hajn (designers), J. F. Koch (later designer of the famous Praga and ČZ motorcycles) and Václav Malý, an enterpreneur and businessman, who was always in search for money and business for the company. In start the new firm with premises in Prague-Vysočany even accepted non-aviation contracts for the five carpenters and three fitters employed, so they produced at least wooden propellers for models, boomerangs etc. to provide some cash flow and stay afloat.

"In the time-frame 1919-1920 Beneš together with Hajn started the work on their first powered aircraft design (before the First World War they have designed and built a couple of their own glider designs). They applied their past experience with „thick"airfoil profiles checked up sufficiently on their many flyable models by draft of this new design. They were inspired by German designs of Hugo Junkers and Anthony Fokker, too, whose airplanes have already shown their qualities during the Great War in combat. Their BH.1 (Exp.) was en experimental wooden prototype. The fuselage was plywood sheet covered, wings and tail were fabric covered. In this era in 1920 were Beneš with Hajn rather daring with their low wing aeroplane arrangement, as well as with use of their originally designed airfoil, wing-to-fuselage attachment - patented later, too - and the simple floating rudder without vertical stabiliser, whose stabilising function took the whole flat rear fuselage.

"The work on the prototype started in the end of Winter 1920 and went very quickly, so on October 9 of the same year the pilot Josef Novák (borrowed from the Aero company) could accomplish the maiden short hop into the air to a height of approximately three feet above ground (1 metre). By this occassion some minor flaws in the engine installation were found and the engine was still not covered. The first real maiden flight to the altitude of 50 meters (164 feet) took place on October 13, 1920. The plane was ready for flight next day and this time it stayed in the air for 10 minutes. The BH.1 surprised by good handling and flying characteristics. The only flaw was the old pre-war Austro Daimler engine delivering insufficient power. Thus the plane could carry only one person accordingly."

There is a lot more on this site, including images of a full size replica being built and flown. Highly recommended if you buy and build the ViZi Models 1/72 Avia BH-1 Experimental.

The ViZi Models 1/72 Avia BH-1 Experimental consists of 21 pieces of gray, 3D printed resin, one small sheet of clear windscreens and decals for the singular scheme, nicely printed and in register.

Once parts are removed from their "runners", or "sprue", then construction won't take long. The cockpit is a piece of art, being one-piece with everything in place in the single casting. ViZi Models doesn't include seat belts so an alternate source will be needed. In addition there are no instruments/instrument panel provided, but even on the excellent site noted above, there are no photos of this area, period or replica, so you're on your own. Finally, ViZi Models doesn't include any information about interior colors, but it can be gleaned from that site that everything was left "natural", so wood for the cockpit bulkheads and floors; leather for the seats; and linen for the interior cockpit sides.

Construction is super simple. Once the one-piece cockpit painted and everything added you want, then it's inserted into the cockpit from the bottom, then the one-piece fuselage underside glued on. To the fuselage is then added the one-piece, beautifully printed engine (a marvel in its own right) and the forward fuselage piece and underside radiator. Add the wings, tail surfaces and you're ready to paint.

I personally will wait to add the landing gear and wing struts until after painting, but do take care with the wing struts. There are ends printed on that will go into holes in the wings and fuselage, things easily broken off if not handled carefully.

As was mentioned earlier, the aircraft was left "natural" - not painted - so the fuselage and landing gear are wood, while the flying surfaces are linen, so a clear-doped-linen paint is necessary. Plus, the front of the fuselage around the engine was left in its natural metal, "aluminum" color.

This is truly a beautifully printed 3D kit from ViZi Models. Yes, there is some slight "banding" (striations) in the print, but it's very slight and could be left as-is, to give it that "natural" feeling (wood grain, fabric weave, etc.) or you could lightly sand the surfaces. But be careful, because there is a lot of expertly done, small details that could be removed during sanding, something you definitely want to avoid.

This BH-1 Experimental will look great once finished. I'm definitely looking forward to finishing mine. Huge thanks to ViZi Models for supplying the review model.