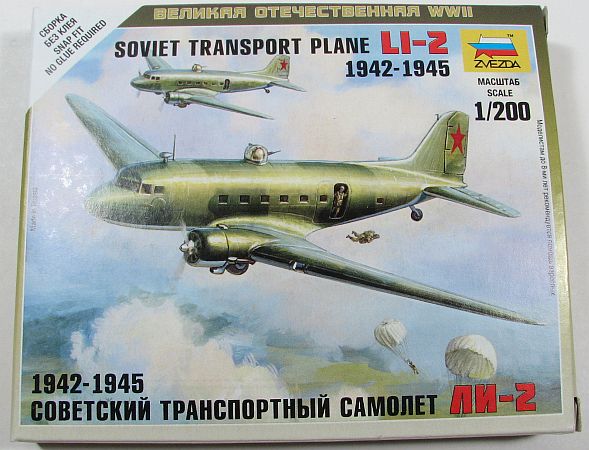 The Lisunov Li-2 was a license-built copy of the Douglas DC-3. The biggest visual difference between all versions of the Li-2 and the DC-3 were the use of the Shvetsov Ash-62IR engines, which were fully shuttered. Many military Li-2s could also easily be distinguished from the DC-3 due to the turret-mounted gun on the top of the fuselage. There were just over 4900 examples put into production. 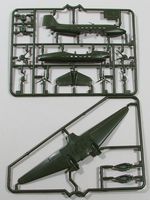 The Zvezda 1/200 Li-2 is meant to be used with their war game. While I personally would have preferred 1/144 for all their "larger subject" releases, 1/200 makes sense in the gaming world. The kit consists of 14 pieces of green, injected plastic (with the option of either "up" or "down" main landing gear); two pieces of clear injected plastic (one piece for all windows including the windscreen, and the other piece for the turret); and a two piece stand if wanted. The decals are pretty generic, consisting of just red stars and red numerals (1-9) if wanted to mark up your Li-2.

Construction couldn't be simpler, especially since this is supposed to be a snap-together kit. The one aspect I think it ingenious is the one-piece clear that takes care of most of the windows. This one piece snaps into one fuselage half and contains not only the main windscreen for the cockpit, but all windows along both fuselage sides. Nice! While I was thinking of replacing the side windows with Kristal Kleer, I think I will use the plastic instead, just to see how this area works. Plus, there's no interior at all to display. 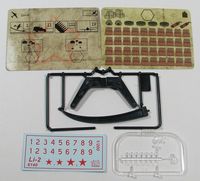 Now that the tail is on, you finish the model by adding the first the underside nacelles (the tops are molded into the top of the wing) followed by the cowls. While the instructions have you mount the props next, I would leave those off, plus the landing gear, until after painting. The kit provides the option of landing gear either down or up (which are actually separate, single pieces for each side). If you decide to not use the included stand, then you'll probably want to fill in the slot on the kits' underside.

Once painting, decaling and final weathering is finished, then you can add the props and clear turret dome to the top of the fuselage. You now have a finished 1/200 Li-2.

If you don't mind the scale, and want a quick build of an Li-2, then this is a good kit for you. It will probably be a necessity, though, if you're playing the Zvezda war game. Either way, it should be a quick and easy build and will look great once finished.

My thanks to Dragon USA for supplying the review Li-2.