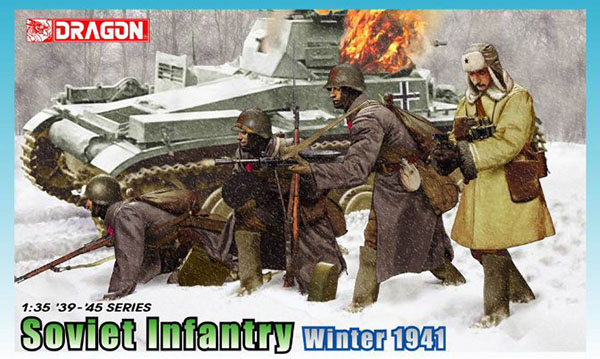 Germany mounted a massive invasion of the Soviet Union on 22 June 1941, and the powerful force's momentum took troops to the very gates of Moscow. However, amidst stiffening Soviet resistance, freezing weather and badly overstretched supply lines, the attack slowed and stalled.

Stalin had been transferring fresh troops from Siberia and the Far East since autumn, and in early December 1941 they helped launch a counteroffensive near Moscow. These troops were better equipped for cold-weather operations than the Germans, and as they advanced, Soviet forces drove a gap between Army Group North and Army Group Center. It's from this desperate period of winter fighting that this figure set emanates.

The side-opening box contains four small sprues and one large sprue of figures and personal gear, weapons and paraphernalia.  The weapons include Mosin-Nagant rifles and a DP28 light machine gun.

The soldiers are dressed for winter combat in various poses. They wear uniform gear such as greatcoats, sheepskin jackets, toques, mittens/gloves and fur boots.  Molding is good, except for some light flash around the sharp edges here and there as well as cooling lines along the torsos and backs.

The breakdown of parts is conventional, i.e. upper torso, separate right and left legs, arms and a separate head with separate headgear.  Once figure is crawling on his hands and knees with rifle in hand, one in on one knee, crouched, holding an AT mine with a canister at his knee, one is lunging with a light machine gun at the hip and one is walking with a sidearm pointed forward.

The sculpting of all four figures looks good, with decent detail, but not as good as I've seen with other Dragon sets.  The weapons will suit the task, but again, lack the crisp detail found in other sets.  They box includes two rifles, three sub-machine guns of two types, and a light machine gun.

The personal gear on the large sprue include a wide variety of helmets, ammo packs,  back packs, sacks, mines, side arms, knives, etc. The molding again is rather plain but no flash is evident.  The built-up figures look like normal overloaded and heavily insulated Russian infantry.

The back of the kit box contains assembly and painting instructions with callouts for Gunze Acrylics and Mr. Color Lacquer lines, as well as Model Master Enamels.

With more and more modelers adding figures to their work, this kit would certainly be right up there for Eastern Front combat dioramas.  With a good finish this kit should build up into nice and unique representations of the real thing.

I recommend this kit to anyone who likes to build and finish Eastern Front Russian infantry doing what infantry does. I would like to thank Dragon USA for providing this kit for review, and Internet Modeler for giving me the opportunity to review it.