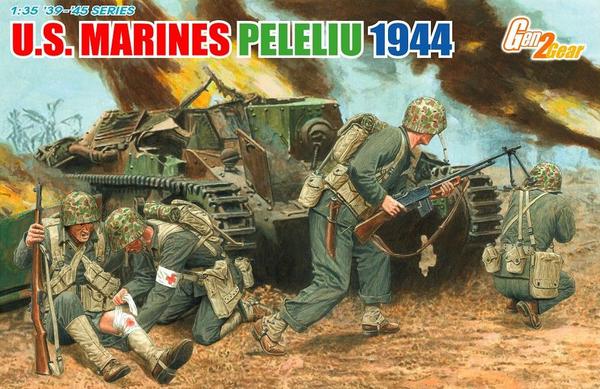 The Battle of Peleliu, codenamed Operation Stalemate II, was fought between the United States and the Empire of Japan in the Pacific Theater of World War II, from September–November 1944 on the island of Peleliu, present-day Palau. First Division Marines and later Army soldiers of the 81st Infantry Division, fought to capture an airstrip on the small coral island.  Major General William Rupertus—commander of 1st Marine Division—predicted the island would be secured within four days. However, due to Japan's well-crafted fortifications and stiff resistance, the battle lasted over two months. In the United States, it was a controversial battle because of the island's questionable strategic value and the high casualty rate, which was the highest for U.S. soldiers of any battle in the Pacific War.  The National Museum of the Marine Corps called it "the bitterest battle of the war for the Marines". 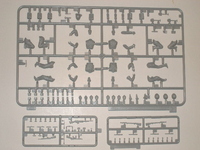 The side-opening box contains one large spue of figures and personal gear, and two small sprues containing five weapons and their various attachments, such as scopes, clips, etc,  The weapons include hollowed-out gun muzzles and optional parts (the BAR, for example, can be set up on it’s tripod, or used ‘from the hip’. 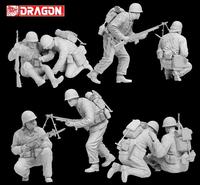 As usual for their figure sets, Dragon has provided four figures in various poses. Molding is good, except for some light flash around the sharp edges here and there as well as cooling lines along the torsos and backs.  The breakdown of parts is conventional, i.e. upper torso, separate right and left legs, arms and a separate head with separate headgear.  Once figure is sitting, one kneeling, one running and the fourth is a corpsman, crouching.

The sculpting of all four figures looks good, with fine detail.  Their boots even have tread detail, unusual on injection molded figures, especially ones molded in standing positions. All the weapons in the set look really nice.  They include three rifles with optional sites, a Thomson submachine gun, and the aforementioned BAR with separate tripod and carrying options.  The personal kit parts on the sprue are in multiples of three, four, and/or five. For example, there are three helmets, eight canteens, twelve ammunition cases, five backpacks… not much sense, but the built up figures look like normal overloaded American Marines.

The back of the kit box contains assembly and painting instructions with callouts for Gunze Acrylics and Mr. Color Lacquer lines, as well as Model Master Enamels.  The instructions also contain a go-by for the multi-colored Marine canvas-covered helmet.

With more and more modelers adding figures to their work, this kit would certainly be right up there for Pacific-Theater combat dioramas.  I personally like the addition of the wounded Marine being attended to by a corpsman.  With a good finish this kit should build up into nice and unique representations of the real thing.  I recommend this kit to anyone who likes to build and finish Pacific Theater Marines doing what Marines do.  I would like to thank Dragon Models USA for providing this kit for review, and Internet Modeler for giving me the opportunity to review it.