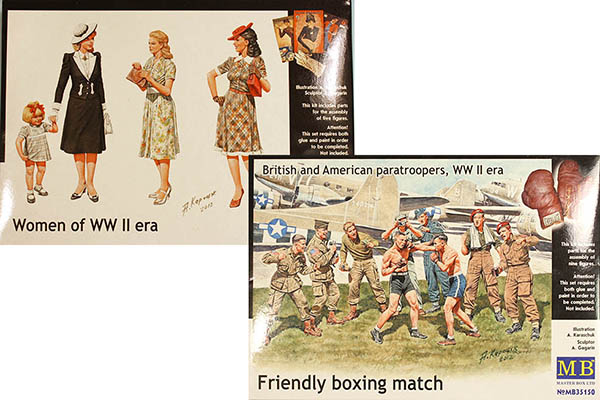 These two kits crossed my workbench a few days ago and the subject matter is interesting to say the least. Both are in 1/35 scale. The Women of WW II set consists of four adult and one female child on a single sprue with 43 parts in tan plastic. The second set consists of nine US and British paras with two of them "duking it out". The paras kit consists of 60 parts on two sprues, also in tan plastic.

The poses on the females are, for the most part, rather static but the paras are somewhat more animated, especially the two boxers. Seam lines are very minimal and should easily clean up with careful scraping & filing. The back of the box shows the parts on the sprue by number and the corresponding location of the part on its proper figure.

Both sets were sculpted by A Gagarin and are very well done. The faces on all the figures are very detailed, as are the uniforms on the paras. The 2 boxers are certainly muscular and are very well defined.  The uniform details especially, are quite crisp which should make painting rather easy. The hair styles and dresses on the females look correct for the period. The front box art on the female set shows some nice patterned dresses, but the paint ups on the back are painted somewhat simpler, which should not deter anyone from trying something different.

Our thanks to Dragon Models USA for the review samples.