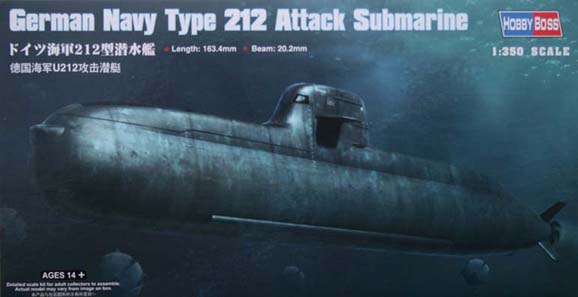 The Type 212 submarine was developed starting in1994 by Howaldtswerke-Deutsche Werft AG for the German and Italian Navies. Six of the original design were launched and are in service (four with the German Navy, two with the Italian) and four more improved versions have been ordered.

Featuring X-shaped stern dive planes, fuel cell propulsion, and a blended hull / sail design, the Type 212 can operate under water for longer periods of time than other non-nuclear submarines and in as little as 17 meters (about 56 feet) of water.

Hull Top & Bottom
Plastic parts comprise one tree of parts, upper and lower hull halves, and a stand base. The upper and lower pieces are separated at the hotizontal center line and not the waterline. Detail is crisp and well-molded, however there is a slight tendency for the surface to get slightly rougher as it reaches the joints. As this area will most likely be sanded by the builder I think this may be a non-issue. 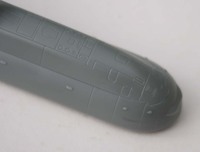 Bow Detail & Mold Seam
HobbyBoss needed to break the mold for the upper hull into a couple of pieces in order to keep the detail crisp; the result is a slight raised mold line in a couple of areas where these pieces joined up (partially visible in the photo to the right), but they were small enough on my kit that a couple of passes with some ordinary fine sand paper should clean them right up. The lower hull was also molded with separate mold pieces, but the mold seams are extremely hard to notice and can most likely be ignored.

Test fit - No Glue
Test fitting of the two pieces showed a good fit... not 100% perfect, but one that should be easily manageable and reguiring a minimal filling and sanding. All of the panel lines matched up, thus there should no need to filland re-scribe any lines other than to remove filler. One possible annoyance is the top of the sail, which has a raised sensor just below the joint to the cap of the sail. This detail may make the seam more difficult to fill lest one damage or destroy it.

Propellors
The parts tree contains 22 well-molded parts, over half of which are technically optional. There are two propellors included; one six and a seven-bladed version with slightly different blade profiles. Photo-etch blades are included as well, but these are so thin and well molded that very few would be disappointed with them.

Optional Sail pieces
Options are provided to allow the builder either a clean sail or bristling with all of the antennaes and scopes one could want. All of the pieces on my kit looked well done and none were damaged, unlike some other kits I have purchased recently from other manufacturers.

A small sheet of photo-etch is included with the kit. Present are the two propellors again, a spray shield for the sail cockpit, two chocks or hand-holds for the same area, a generic brass nameplate, and the anti-torpedo control wire bracing that is mounted around the tail planes to keep the guide cables from torpedos from entangling the propellor. One side of my sheet was sharply bent, but it did not affect any of the pieces.

The instructions are contained on a single sheet of paper, with disclaimers and test on one side and parts tree diagrams plus the actual instructions on the other. Graphics are clean and easy to understand, but I quibble a bit about the build order shown and the representation of the stern plane bracing photo-etch, which needs to be cut and left loose around the hull before the stern planes are attached. If this is not done the PE piece will be destroyed or distorted trying to fit it over the X.

The instructions would also have the builder affix the various masts to the sail cap BEFORE attaching this cap to the hull, which essentially destroys any ability to fill and sand any leftover joints. The experienced modeler will know not to do this, but a first-timer might not and be frustrated. Lastly, the instructions show the "option" of the two different propellor blades (technically four options), but doesn't define the purpose behind the option; was one used only on certain boats, or at certain times? It's up to the builder to find out.

The next included piece is the color and decal placement chart. Hobbyboss has done a decent job of trying to represent the subtle variations of black these boats have, using flat black, RLM66 Black Gray, and RLM75 Gray Violet in different parts of the hull. I'm not sure how close it will look, as I plan on doing one of the Italian boats they did not provide markings for, which is painted in a beautiful blue above the waterline. Markings are provided only for the four German boats, and not ver clearly breaking down which hull number and insignia should be matched for any particular submarine. The last quibble is that the propellors are shown as being gold, instead of bronze, a perhaps subtle but less garish and more truthful representation.

A small sheet of decals is provided, with hull numbers, insignia, depth markings, and two German flags. All appear well done, the depth markings are fine enough to be difficult to see against the backing paper, but should stand out quite well on the dark hulls.

The HobbyBoss 1/350th Type 212 should be a fun build for most modelers and a good "dip the toe in" kit for those thinking of "diving" into the submarine model side of the hobby. I find few vices in the kit so far.