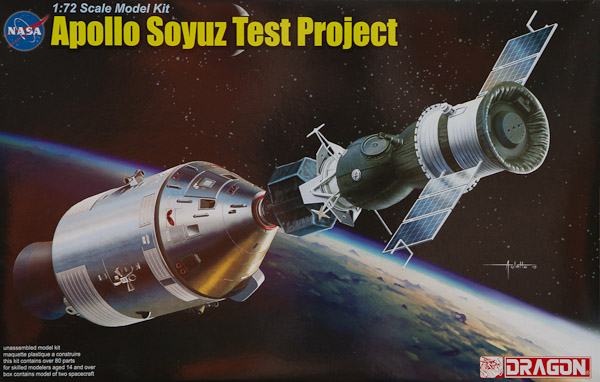 After the United States won the race to the moon, the Apollo program was further used in space exploration, in conjunction with the Soviet Union, in the Apollo-Soyuz Test Program. This saw the mating up of the American Apollo spacecraft with the Soviet Soyuz spacecraft while in orbit around the Earth, marking the first joint US-Soviet space flight.

Dragon has continued their 1/72 Apollo series by releasing this boxing that combines the Apollo Command Module with the Soyuz spacecraft. The kit includes the standard plastic Apollo kit, which features nice detailing throughout, and a soft vinyl-type plastic Soyuz that gets styrene details. I'm not entirely sure why Dragon has chosen to do this kit in this type of plastic, but the detailing on those soft parts is excellent.

Starting with the Apollo Command Module first, though, this assembly is fairly complicated, as it includes both the Command Service Module and Capsule. The capsule is split into two main pieces, with separate parts for the docking ring. There are optional parts provided should you wish to show the Command Service Module unattached to the Soyuz, but most will want to connect the two, so using the large shaft part will ensure a solid connection.

The main body of the CSM is made up of four external sections that fit around two inner bulkhead rings. This is to get the best possible surface detail on those parts, but it does mean that you will need to take some time with test fitting to minimize seams. The small control rockets are made up from a main body piece and two separate nozzles, and although small they should go together easily. A top bulkhead and a bottom bulkhead round out the main assembly, and the addition of the main rocket nozzle completes the Apollo assembly. The only step left is to add the antenna mast, which is made up from four discs of photoetch and an intricate frame.

For the Soyuz, the assembly of this is constrained to a single step. However, there are a lot of parts going together in that step, so it will pay off to look at those instructions closely. Even more so, look at the boxtop photos, as many of the parts used on the Soyuz are simply shown in place, with no callouts to part numbers. The three main vinyl body parts all fit together logically, so the real challenge is with all of the small details. There are separate solar panels (which feature blue reflective stickers to replicate the panels) and separate antenna arms around the docking collar. The docking collar parts are some of the ones not mentioned in the instructions, so definitely reference the photos on that.

For colors and markings, there are the aforementioned stickers for the Soyuz solar panels, as well as a small decal sheet that provides stenciling. There's not much in the way of large markings here, so really the big finishing challenge will be with the painting. There are lots of areas of natural metal, both dull and polished, with little spots of color here and there, along with the more sedate colors of the Soyuz. Combined together and attached to the included stand, this will really be a nice pairing to put on the display shelf.

This is a great addition to Dragon's growing space collection, and having it in 1/72 means that it will fit in many collections. For those who don't want the entire Saturn V, or are interested in some of the alternative missions flown by the Apollo, this is a great kit to pick up. My thanks to Dragon Models USA for the review kit.