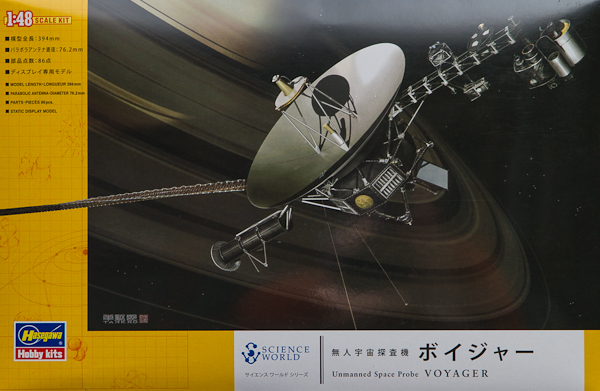 In 1977, NASA launched Voyager 1 and Voyager 2, a pair of unmanned space probes designed to explore our solar system and beyond. Their primary mission was the exploration of Jupiter and Saturn, and after making many discoveries there, their mission was extended to explore further, with Voyager 2 checking out Neptune and Uranus. Now, 35 years after their launch, the two probes are still healthy and sending data back to NASA as they prepare to push beyond the heliosheath and into interstellar space. The NASA site on the Voyager mission is full of useful information as well as current news about the two probes.

This is the first plastic kit of the Voyager space probe, and will probably remain the only one, as it definitely is an esoteric subject. Still, it is a very historically significant craft, so I applaud Hasegawa for tackling the subject. Done to the standard scale of 1/48, this kit comes molded in several colors and includes a globe stand with a wire support. The golden record is even provided, plated gold. There are no decals, but none are needed as there are no markings visible on the finished model.

Moving on to the actual construction, this is a fairly complicated kit due to the exposed nature of all the struts and supports. The instructions are very clear, though, so following these closely should ensure a smooth assembly. Another nice feature about the instructions are the step titles, which identify exactly what you're building. So the first two steps are on the high-gain antenna, which is made up from eleven individual pieces. This large dish makes up a major part of the finished model, hence the large part count.

Some of the other assemblies include the bus housing electronics assembly, the housing mast assembly, the meter unit assembly, and the high-field magnetometer assembly. Many of these have subassemblies as well, so the housing mast assembly also gets the optical calibration target and radiator, for example. Following the instructions will be quite informative, as I now know what the infrared spectrometer and radiometer look like on the Voyager spacecraft.

Many of the parts are small and will require a bit of cleanup to remove the fine seams, but the assembly itself will be straightforward and it is unlikely that any filler will be needed. For those looking for a real challenge, one could scratch a replacement strut assembly, which is molded solid in this kit. Given that it has an odd twist to it, though, scratchbuilding this out of plastic or brass rod would be challenging.

When the model is finished, a display base is going to be required as this model has fine masts and antennae sticking out at all sorts of angles. The included globe stand is nice, although given that it is Voyager, perhaps having it floating over Earth might not be the best representation of its mission. Personally, I'll try to find a way to add Saturn's rings to the globe, for something a bit different and more of a familiar location for the probe.

This is really a great kit that is something everyone could have fun building. Knowing that the Voyager is about to enter interstellar space makes it all the more exciting. With it being in a standard scale is also nice, as one could have this sitting next to a 1/48 Bleriot or something similar, to highlight how far we have come in so short a time. My thanks to Hasegawa USA for the review sample.