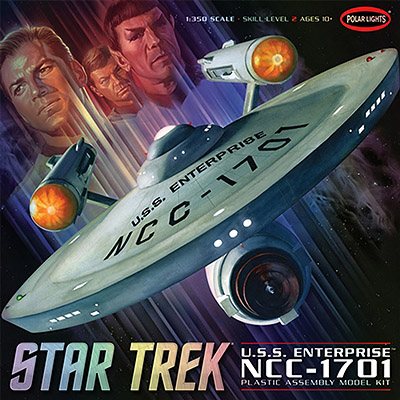 The starship Enterprise is arguably the most famous fictional spaceship in history. Nearly 50 years after the broadcast of its first episode Star Trek fandom is still going strong. Recently Round 2 LLC, under their Polar Lights brand, released an all-new tool of the "E" in 1/350 that, for many, constitutes the Holy Grail of Star Trek modeling.

One of only twelve, the Enterprise is the flagship of the United Federation of Planets' Starfleet. Almost a thousand feet long, she carries a crew of 430. Most of them live and work in the saucer-shaped primary hull.

In an emergency, such as a warp-core breach, the primary hull can be disengaged from the secondary hull and, using her impulse engines, move a safe distance away. The separated primary hull is capable of supporting all 430 crew for a significant period of time while awaiting rescue. The primary hull is also capable of making a controlled landing on a planet should the need arise.

Travel in normal space is accomplished with the starship's impulse engines. They are used mostly for in-system travel or where faster-than-light capability is not needed. While the Enterprise is able to travel far faster than any of our current spacecraft using her impulse engines alone it would still take her years to travel the measly 4 light years between Sol and Alpha Centauri.

To travel between the stars in a timely manner you need to go faster than the speed of light. The Enterprise does this with her warp engines. Contained in 2 parallel nacelles attached to the secondary hull the warp drive "folds" space and enables her to travel many light years in just a few seconds.

The Enterprise was assembled in space and was never meant to enter the atmosphere of a planet, much less land on one. Landing parties are sent to the surface of a planet either by using a teleportation device known as a transporter or one of the small shuttlecraft carried in a special hangar at the aft-end of the ship.

Designed primarily for exploration, when need-be she is also a capable warship. Her main defense is a force-field, called a deflector shield (a more directional version of the deflector is projected in front of the ship as it travels to push aside any object, large or small, that could damage the ship if it were to hit it at speed).

Offensively, she is equipped with energy beam projectors called phasers. The Enterprise also carries photon torpedoes. These are a small amount of matter and anti-matter that are kept separated by a magnetic field. On impact with or in proximity to the intended target the containment field collapses allowing the matter and anti-matter to come into contact with each other.  The resulting annihilation releases a devastating blast of energy.

The model comes in a large box (there'll be no sneaking this one past the significant other!). Upon opening the box you will find it packed to the brim with styrene goodness. The parts are molded in 6 different colors so that those who do not wish to paint their kit will still have an attractive model when finished. All of the parts have a smooth finish except the 2 saucer halves – those parts have an odd, faint, pebbly texture. A little bit of sanding or a coat of Mr. Surfacer should take care of it. Round 2 knows that their Star Trek modelers love to light their kits and the Enterprise has been designed from the outset to make it lighting-friendly. All of the major components utilize a tongue-and-groove mating surface to prevent light-leaks from the seams.

For those who don't want to design and assemble lighting for the model themselves Polar Lights has also released a lighting kit for it. In addition to the actual LED's and wiring you get some replacement parts in clear that originally came in grey. You also get 2 small motors that are used to spin the "fan blades"  in the warp nacelle domes.

As a heads-up, many people have been reporting that these "Fan Blade" Spinners, parts 140, have warped axles. If the axles are warped the Spinners will rub or even bind up against the inside of the nacelle. Round 2 is well aware of the problem and is providing replacement parts free-of-charge. Simply fill out a Part Replacement Form and you should get your un-warped Spinners in a couple of weeks. You can download the form here.

Something that shows just how much thought went into this kit are the parts for the windows and other clear areas. Each tree is replicated in 3 different colors: crystal clear, a translucent white and a dark-grey, nearly black, tint.

If you don't light the sensor dome above the bridge you have the option of installing the included bridge. Use the clear sensor dome part and you can replicate the opening shot from The Cage, the original pilot for Star Trek.

A brief aside: one of the most contentious issues in a model of this version of the Enterprise is the question of grid lines on the saucer. There are drawings by the original designer of the Enterprise, Walter M. "Matt" Jeffries showing a grid on top of the saucer and the 11-foot long filming miniature had these lines applied to the saucer in pencil and many fans thought that should be the way to go in this kit but a significant faction of Enterprise modelers thought there should be engraved lines on the model.

After a number of highly-charged online discussions on the Science Fiction modeling forums, some of which got so out-of-control that moderators had to lock them down, Round 2 decided to go with engraved lines. They are quite fine and those who wish their Enterprise saucer to be smooth should have an easy, if time-consuming, task removing them.

One of the bugaboos with almost all kits of the original series Enterprise is the dreaded "pylon-droop". The warp nacelles are pretty hefty structures and they're attached to the secondary hull by slender pylons with relatively small attachment points. In the past it has often been the case that the way the nacelles attach to the pylon and/or the pylon attaches to the hull was poorly engineered. Over time (sometimes almost immediately!) the nacelles would begin to droop.

Round 2 has obviously spent a good deal of time on this issue and they have engineered a robust system that should prevent any droop.

Due to its large size (32" long when finished!) the model has been designed to be assembled, painted and decaled in sub-assemblies which are then glued together at the end. This is a very good approach and the amount of paint touch-up needed will be minimal.

To display you model when done you get a hemispherical display base with a metal support rod. The rod is hollow to enable you to run the power wires through it if you have lit your model.

The decals provided are comprehensive but they are only for the Enterprise. They have a matte finish and are well-printed, if a little thick. In addition to the markings for the exterior of the Enterprise you get decals to do the shuttlecraft as either the Galileo or Columbus as well as decals to detail the hangar bay and bridge module. If you wish to do a different starship Round 2 sells a set of "Registry" decals containing the names and numbers of other Starfleet ships.

All in all an exceptional kit that should result in a beautiful model with a little effort.