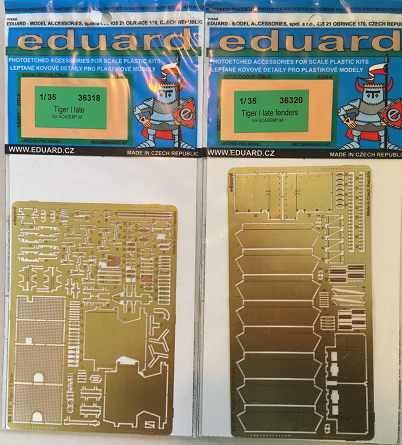 These two sets make up for any minor deficiencies of the Academy Tiger I "Late Version". Set #36-318 is the general set for the overall tank, and -320 is the set of fenders.

The main set is very comprehensive. It replaces the kit engine bay screens with an even better set that features a realistic woven texture. The exhaust shrouds are also replaced with realistically thin items.

Most of the rest of the set covers a very large number of brackets and shackles for the various hull exterior equipment. Using these pieces entails a fair amount of very fine folding, but the result will add a huge level of finesse to the finished model.

Instead of appearing to be blocks (as portrayed in the kit moldings) shackles will be folded metal assemblies with pins through them, just like the originals. Grab handles, reinforcing bands, brackets, and straps will be in scale and better detailed. I do hope you have a sturdy set of tweezers for bending though!

The fender set, #36-320, is much simpler, by its nature. It consists of the fenders down each side, plus mounting brackets and associated hardware. The good news here is that any bends that are slightly off could potentially be passed off as battle damage! In all seriousness, the thin edges made possible with these sets will look great, and they offer the potential for a few creative bends, to add some character.

The addition of these two sets might make a good compromise between the nearly 500 parts of a typical Dragon kit, and a straight out of the box build. I would suggest that some experience with photo-etch would be useful, before tackling the smaller parts in the main set. If one wanted to improve the kit without tearing out too much hair, using just the fenders would make a substantial improvement.

I recommend these sets and I would like to thank Eduard for the review samples.