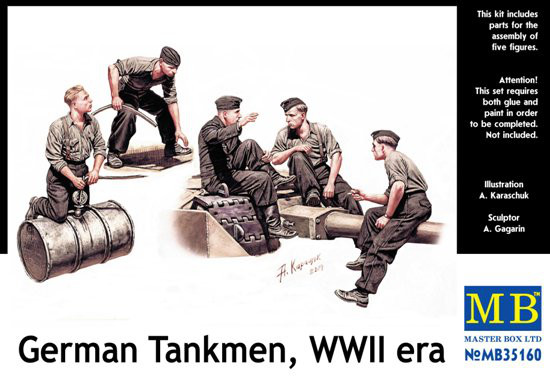 I just received the latest edition from Master Box's 1/35th scale military figure sets, WW II German Tank men. The five, at-rest figures are offered in various poses around an AFV; two of them are handling a refueling task from a 55-gallon drum included in the kit.

The side-opening box contains a single flash-free sprue in soft grey plastic. Besides the parts required for the five figures, MasterBox includes a four-part 55-gallon fuel drum, a rigid length of hose (molded in plastic), and a hand pump. No personal gear or weapons are included in the kit.

The soldiers are dressed for summer and at-ease, presumably occupied with the maintenance of their PzKpfw IV Ausf. J mount. The molding is excellent, except for some light flash around the sharp edges here and there, as well as cooling lines along the torsos and backs.

The breakdown of parts is conventional, i.e. upper torso, separate right and left legs, arms and a separate head. One figure is manning the fuel pump, one the hose and the remaining three figures are seated across the tank mantle and barrel. The sculpting of all five figures is commensurate with other MB figure sets, with excellent detail and exceptional faces.

The back of the kit box contains assembly and painting instructions with callouts for Vallejo and Lifecolor Acrylics.

More and more modelers add figures to their work and this kit would certainly be right up there for armored vehicle dioramas. With a good finish this kit should build up into a great and unique representations of a tank crew. I recommend this kit to anyone who likes to build and finish military figures in 1/35th scale.

I would like to thank Master Box and Stevens International for providing this kit for review, and Internet Modeler for giving me the opportunity to review it.