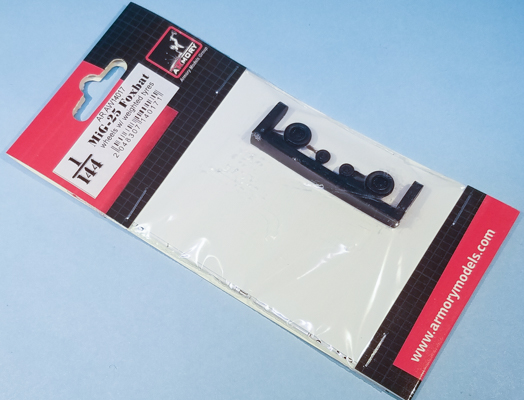 So far there has only been one kit produced of the MiG-25 worth noting, and that had its origins with the company LS. To be honest, I'm not exactly sure which version the kit represents out of the box (if anyone could help, that would be appreciated) but know there are a few conversions from RetroWings to make the P, RB/RBSh and PU/RU two-seater. In addition, RetroWings has a 5300 liter tank, as well as a cockpit to add the otherwise blank kit area. Finally, Click2Detail released a set of exhausts that will really dress up the kit.

The Armory 1/144 MiG-25 wheels consists of two main wheels along with two nose wheels. The tires are represented as "weighted" and there is a certain way they need to be added to the kit, noted in the instructions.

These replacement wheels will look great on a finished model and are worlds better than the kit-supplied parts. Pick them up if you want to build a 1/144 MiG-25, you'll be glad you did.

My thanks to Armory for sending the review wheels.