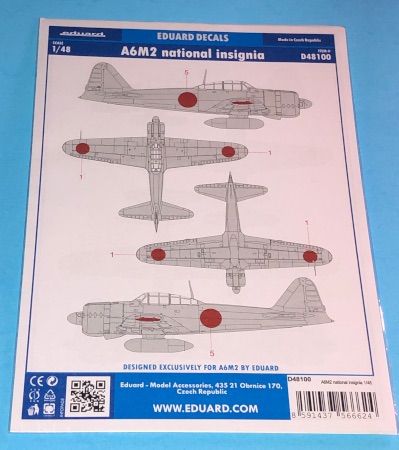 Eduard produced this Hinomaru sheet to coincide with the introduction of their new Mitsubishi/Nakajima A6M2 Reisen/Zeke kit. It's a small sheet of only 14 decals. It includes Hinomarus with and without outlines; the outlines have 2 different thicknesses and are intended for the fuselage and upper wings.

Note that the Hinomarus lacking the outline come in 2 different shades of red. Research by noted historian and researcher Nicholas Millman, author of the booklet "Painting the early Zero-Sen, a Primer for Modellers & Artists" indicates that the paint used for Hinomarus darkened with age. This means-in theory-that Hinomarus on early A6M2s were a lighter red than later Hinomarus. This is fascinating information.

This national insignia sheet will come in handy for A6Ms for all stages of World War II. I recommend these decals and would like to thank Eduard for the review sample.