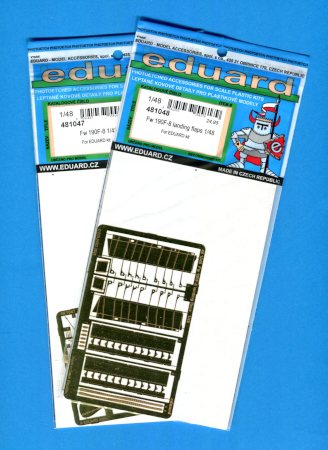 Eduard recently released 2 photo-etch sets for their Focke-Wulf FW190 kit. Let's take a look at them. They are as follows:

This set is a single brass fret containing 34 parts. You get upgrades like new landing gear doors, oleo scissors, brake lines, etc. It also includes enhancements such as lower wing cannon ejection chutes, machine gun ejection chutes for the wheel wells, etc. The detail of these parts is as superb as I have come to expect from Eduard.

This is complex set, consisting of 11 parts on a single fret. This is one of Eduard's “not-for-the-faint-of-heart” flap sets. You have to file/sand down the flap area on both the upper and lower wings and replace it with the multi-piece etched flap assemblies. You'll need your magnifier of choice, a good PE folding tool and confidence in your modeling skills. Just take your time and pay close attention to Eduard's well illustrated instructions and you will be quite satisfied with the results.

If you're a fan of Eduard's retooled Focke-Wulf FW190F-8 kit and you would like to add significantly greater detail Eduard has you covered with these photo-etch sets. I recommend them and I would like to thank Eduard for the review samples.