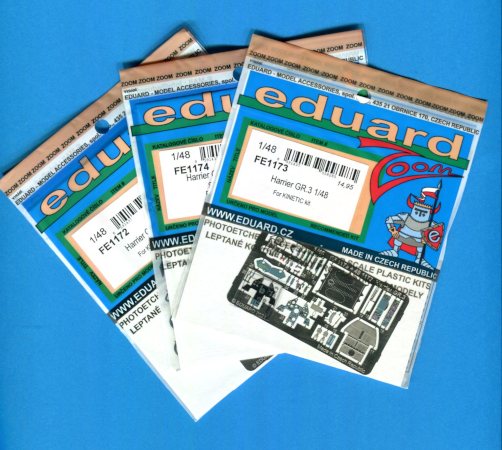 Eduard recently released 5 new photo-etch sets for the Kinetic Harrier GR.1 and GR.3 kits. Let's take a look at 3 of them. They are as follows:

The ZOOM set is a single fret containing 27 parts, many of them pre-painted. You get upgrades like a new instrument panel, rudder pedals, gun sight, sidewall consoles, throttle quadrant, etc.

The ZOOM set is for the Harrier GR.3. It's a single fret containing 27 parts and it's identical to the GR.1 set. Other enhancements include a windshield wiper, canopy detonation warning placard, canopy mirror, pitot tube, front wheel well bay detail, etc.

This simple set consists of just 10 pieces on a small steel fret. It includes some detail parts for the upper ejection seat in addition to a complete seat harness.

The Harrier was the world's first successful VSTOL aircraft. If you're a fan of the Kinetic Harrier GR.1 and GR.3 kits and you'd like to increase the detail level Eduard has you covered with these 3 PE sets. I recommend them and I would like to thank Eduard for the review samples.

Modeling the Harrier I and II, by Glenn Ashley, Osprey Publications, 2003