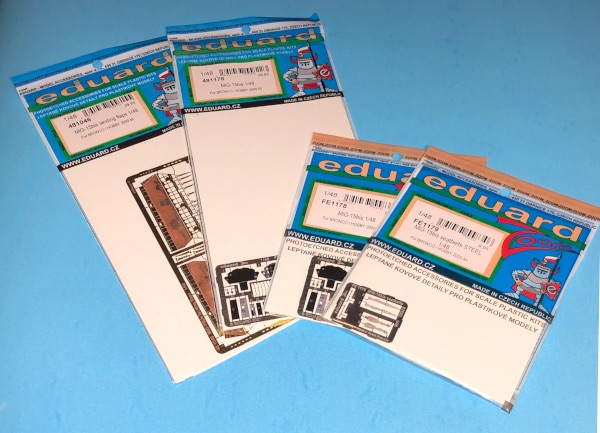 Eduard recently released 4 new photo-etch sets for the Bronco/Hobby 2000 MiG-15bis kit. Let's take a look at them. They are as follows:

The ZOOM set is a single fret containing 31 parts, many of them pre-painted. You get upgrades like a new instrument panel, sidewall consoles, throttle quadrant, etc. The detail of the pre-painted parts is as superb as I have come to expect from Eduard.

This simple PE set consists of 5 pre-painted parts on a VERY small fret. It includes a seat harness complete with anti-chafing pads on the lap belts.

This is complex set, consisting of 44 parts on a single fret. This is one of Eduard's "not-for-the-faint-of-heart" flap sets. You have to file/sand down the flap area on the inner lower wing and replace it with the multi-piece etched flap assemblies. You'll need your magnifier of choice, a good PE folding tool and confidence in your modeling skills! I'm over dramatizing things: just take your time and pay close attention to Eduard's well illustrated instructions and you will be quite satisfied with the results.

If you're a fan of the Bronco/Hobby 2000 MiG-15bis kit and you'd like to up the ante with significantly greater detail Eduard has you covered with these 4 PE sets. If you're daunted by the prospects of folding up the flaps and adding the wing fences you can simply opt for the ZOOM and seat belt sets. I recommend them and I would like to thank Eduard for the review samples.