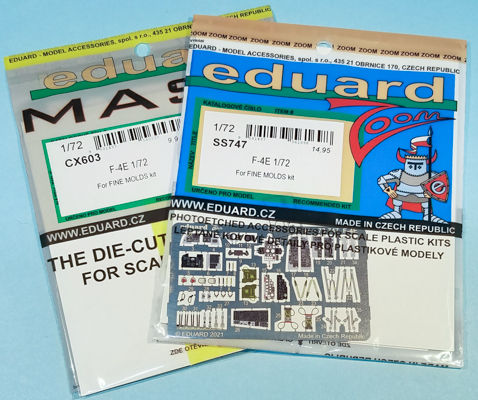 Now considered the "best in scale", the Fine Molds 1/72 F-4E is truly a very nice kit. Now Eduard has released a number of aftermarket items for that kit.

First released was a set of masks, catalog number CX603. As is usual, Eduard provides masks for all parts of the canopy as well as the tires.

Next by Eduard is a Zoom set, which contains parts mainly for the interior. First there is some plastic removal from some parts, such as small portions of the ejection seats and molded-on side-wall details. Once the "plastic surgery" has been accomplished, Eduard provides the following pieces of photoetch: replacement parts, as well as seat pads and seat belts for both seats; additional parts for all sidewall detail as well as side console detail on the cockpit tub; numerous items for both instrument panels; and finally additions to the canopy sills and a replacment Head's Up Display (HUD). Just enough to make the interior of the Fine Molds F-4E that much better.

I definitely thank Eduard for sending these sets to review.