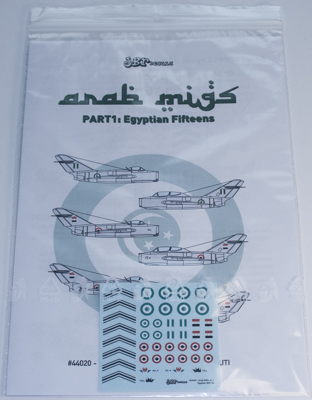 When Eduard handed out a 1/144 MiG-15 at the 2014 E-Day there was a lot of excitement. All 1000 they made for the event were gone in a flash so JBr took a chance and had a couple of sets of decals available at the same event. It definitely paid out as they are first on the market with decals for the new kit.

While the main release isn't due until December of 2014 it's great to already have aftermarket show up for it. Their second set of decals for the kit from JBr Decals is in their Arab MiGs series and this Part 1 is for Egyptian MiGs. However, they're not just Egyptian:

Decals are at the usual high quality JBr is known for and do look really nice. All aircraft are natural metal overall.

Be aware these decals won't just work with the Eduard kit but they should also work with the Attack kit if you have any of those as well. So as you acquire MiG-15 kits there are options out there for more schemes and JBr Decals are leading the way.

Big thanks to JBr Decals for the review sheet.