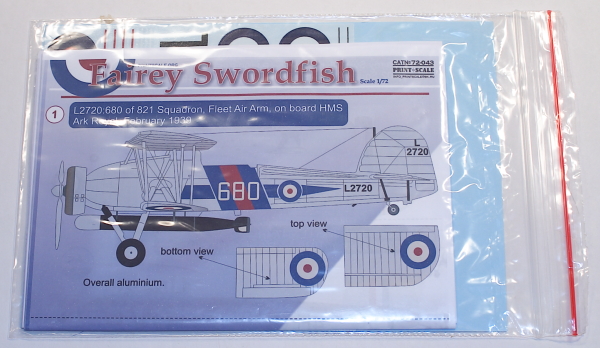 Since there were approximately 2400 Fairey Swordfish built, there are bound to be plenty of marking options for it. Print Scale has realized this and released this set of decals for a 1/72 kit. There is no specific model manufacturer listed, but you can be sure it was probably meant for the ultimate Swordfish kit, put out a little while ago by Airfix. There are eleven aircraft in this release:

The decals appear nicely finished and in register. My only complaint is with the instructions. While there is a four-view profile for an overall camouflaged aircraft, there is no mention at all about what "Scheme 2", "Scheme 3" or "Scheme 4" really is. Plus, the two aircraft labeled as "Scheme 2" are different; one has camouflage that runs the entire fuselage, while the other only has camouflage on top of the fuselage with Sky fuselage sides.

If you have references for the Swordfish for how these schemes look, then use them. If you don't, you'll definitely need to find some to help show how these schemes differed and how they were applied. Even with my caveat, I still am glad I have these to use.

Many thanks to Print Scale for the review sheet.