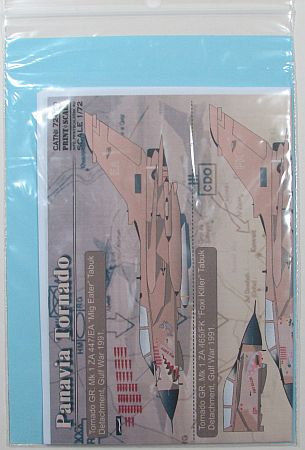 Once again Print Scale has released a set of decals for an older kit, with the entire sheet consisting of aircraft that flew during Desert Storm in 1991. This sheet is in 1/72 and is for the Panavia Tornado. The following aircraft are covered:

The decals are very nicely printed and appear to be in register. There are stencils not only for the aircraft, but also for some ordnance. All aircraft were painted overall in Desert Pink. The instructions appear top-notch, not only showing where all stencils are to be applied, but also variations of color in the airframe (black nose, brown "wing seal bags", etc.).

If you're looking for alternative markings for a GR Mk.1 Tornado, and you want those markings to be for Desert Storm (I believe the British called it Operation Granby) then you'll definitely want to pick up this sheet.

Many thanks to Print Scale for sending this sheet to review.