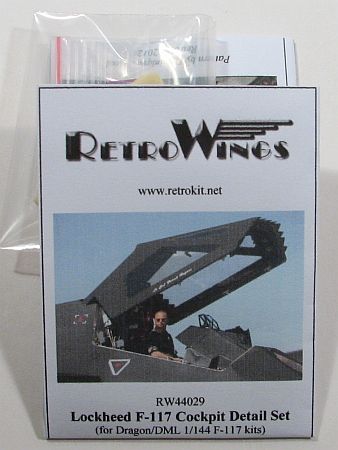 If you have any experience with the Dragon/DML 1/144 F-117, you know that what Dragon provides is nothing short of a blob for a pilot in a blob of a cockpit. Now you have an alternative.

The RetroWings replacement resin cockpit for the F-117 consists of a cockpit tub, seat and control stick. There is some kit modifications needed, namely making the hole in the upper fuselage for the cockpit a little bigger, and sanding down the bulge on the inside of the lower wing that is the nose gear well. Be careful with this, though, so you don't punch through the floor of the landing gear well. 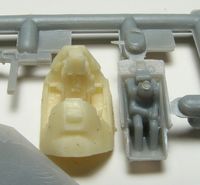 Even with the replacement cockpit, RetroWings still recommends closing the canopy, primarily because in an open state, the Dragon canopy isn't accurate (primarily because it lacks the "saw tooth seam" of the original). With closing, the kit will still look great and the cockpit is sorely needed.

I'm looking forward to getting back to the F-117 I started a few years ago but stopped because of the cockpit. Now with the RetroWings resin set, finishing the F-117 became not only easier, but more desirable as well.

Huge thanks to RetroWings not only for the review cockpit, but also for taking my recommendation and running with it. Thanks, Domi! 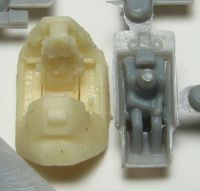