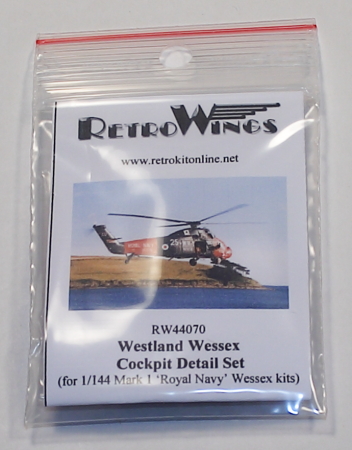 The first "new" mold from Mark I, after acquiring Attack last year, is their 1/144 Westland Wessex series of helicopters. Their first two releases were the HAS.1 and the HAS.3, and it appears the next two releases are the HU.5 and HC.2, available later this year. Those first two were released late last year, and now – a few months later – RetroWings has released this cockpit set for this series of kits. 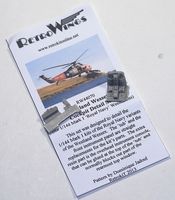 It's basically a drop-in replacement. RetroWings supplies you with three  pieces, the actual cockpit, the instrument panel as well as the overhead instrument console. That is glued to the top of the cockpit tub which blocks the view of the rear fuselage from the rear top window.

The level of detail on the replacement is why this is worth tracking down. The kit's tub is extremely plain with little-to-no detail, but the resin replacement part has a lot of detail molded in. With deft painting all this detail will stand out and make the cockpit look even better. The only concern I have is the actual clear piece from Mark I. I think it's too thick to allow all this great detail to show through. I might fashion a new clear piece by "squash casting it" using the original as a master.

Even if you don't want to go to that much trouble, this cockpit set is still worth tracking down. Given how easy it will be to fit to the kit the added detail is needed regardless.

My thanks to RetrokiT for sending this in for review.