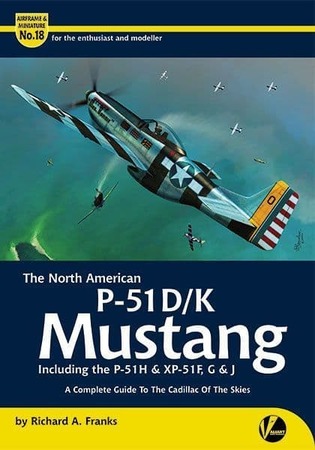 Valiant Wings has come out with a new edition in their Airframe & Miniature series devoted to the bubbletop North American P-51D/K and P-51H. It also caters to the X-51F,G and J prototypes.

The Airframe & Miniature series books combine a detailed overview and technical description of the subject, and combine it with a thorough outline of the subject's portrayal in the modeling realm. The P-51D/K Mustang family has a well known history and lots of documentation out there, so the history section should not be expected to be the most comprehensive out there. Still, what is presented is quite useful, with each subtype being described. Accompanying this are drawings that visually show the differences between the marks. A camouflage & markings section highlights the colorful schemes worn by the P-51D/K and H during World War II and the Post War period, including the Korean War, through the use of color profile illustrations. One of the best parts of this section is a series of drawings depicting which airframe parts were unpainted aluminum and which were painted a mixture of aluminum paste and clear lacquer. This is really useful in accurately depicting the P-51 airframein modeling form. Finally, in the back of the book is a set of detailed scale drawings that will be of immense use to the modeler.

Following the builds are sections that show all the different variants, including prototypes and one-off test aircraft, with callouts identifying the specific changes found on that version, period drawings, and a comprehensive aftermarket list of both detail accessories and decal sheets.

If you are looking for defnitive book on modeling the bubbletop P-51D/K/H this is among the best to have. It provides the nuts and bolts you need to build any one of the latest P-51D kits out there, out of the box or superdetailed. Given how quickly the Airframe & Miniatures editions sell out, I would not hesitate too long on getting your own copy. My thanks to Valiant Wings for the review copy.