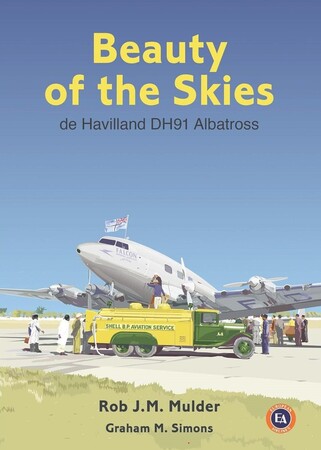 An aircraft I consider one of the most beautiful is the de Havilland DH91 Albatross. It has very sleek lines and with the way is constructed, very few panel lines to break up its shape. This release from European Airlines covers the aircraft, and so much more. The book is broken up thusly:

The book also has the following Appendices:

While the book covers the aircraft in great detail, it also has histories about British Airways, Imperial Airways as well as the company resulting in their merger: BOAC (British Overseas Airways Corporation).

Because the aircraft was manufactured mostly of wood, it had its problems including one lost to arson. But you can see how the DH91 led to the design of one of de Havilland's most famous aircraft: the Mosquito.

This book is a must if you want to know about the DH91 and the early years of British airline operation. It truly is an inspiration to track down and build a model of this sleek design. Speaking of models, that last Appendix talks about a 1/8 flying RC model.

Modeling-wise I can find information about three models: the 1/72 kit(s) from Valom (only changes between the boxings are the markings); and 1/144 resin kits both from F-RSIN (out of production) and Welsh Models.

Many thanks go to European Airlines for the opportunity to review this stunning book.