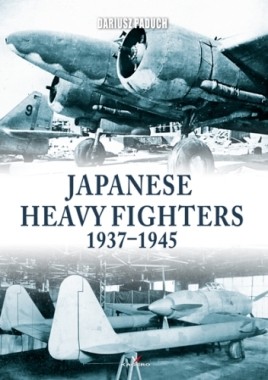 I'm a longtime fan of World War II Japanese aircraft. The A6M Zeke and Ki-84 Hayate are 2 planes that many modelers are familiar with. But how about the Rikigun Ki-93 or the Aichi S1A Denko? I hadn't hear of either of these planes prior to receiving Darius Paduch's great new book on the development of Japanese Heavy Fighters from 1937 through 1945. Paduch divided the book into 3 sections, Heavy fighters of the Imperial Japanese Army Air Service, Heavy fighters of the Imperial Japanese Navy Air Service and Japanese aircraft weapons.

The Japanese kept abreast of global airplane development. They built foreign planes under license and gradually built aircraft of their own design. The military foresaw the possibility of warfare fought over the Pacific, requiring planes possessing the twin attributes of heavy armament and a long combat range. Some designers felt that twin engine fighters were a solution and aircraft such as the Kawasaki Ki-45 Toryu (Nick) and Nakajima J1N Gekko (Irving) resulted from this thinking. Both designs were developed into viable planes which saw active service with Army and Navy, respectively.

The Japanese aircraft industry produced many fascinating designs. Among them are cool aircraft such as the high altitude fighters Tachikawa Ki-94 with pressurized cockpit, the turbocharged Nakajima Ki-87 and the radical rear engined Kyushu J7W Shinden.

In addition to indigenous designs the Japanese also built several German planes under license, such as the jet engined Nakajima Ki-201 Karyu (based on the Messerschmitt Me 262) and the rocket powered Mitsubishi J8M1 Shusui (the Japanese Me-163 copy).

What a wonderful book full of fascinating planes. Many of them never advanced beyond the prototype stage, let alone were pressed into service. If you're a fan of the unusual and exotic then this book is for you. I recommend it and I would like to thank Kagero for the review sample.