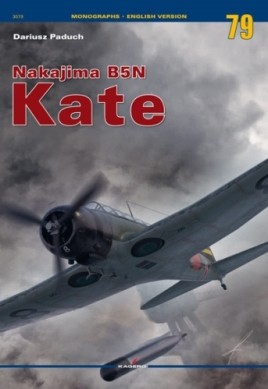 The attack on Pearl Harbor in 1941 marked the official entry of the United States into the Second World War, and as such has resulted in an outsized interest in the Japanese aircraft that took part. As such, the A6M Zero, D3A Val, and B5N Kate are some of the better-covered aircraft in publications, and are often the subjects of newer explorations of the types. Such is the case with this new title from Kagero that focuses on the Nakajima B5N Kate, the primary torpedo bomber of the Imperial Japanese Navy for a large portion of Japan’s war effort during the Second World War.

As we have come to expect from Kagero’s Monograph series, this book provides a solid combination of development and operational histories of the B5N Kate, which was the most advanced torpedo bomber at the beginning of the Second World War. The first section talks about how that wasn’t an easy path to take, though, and highlights the challenges put forth and ultimately solved by Nakajima.

The operational history is equally interesting, as the plane remained the dominant torpedo bomber through to late 1943 and early 1944. The B5N Kate saw service in just about every major naval battle fought by the Japanese in those early years, and the text provides a solid outline of that combat history. Complementing the written story are lots of photographs showing the B5N throughout its career in the IJN, capturing the changing camouflage and markings worn by the type.

Color photography was extremely rare in Japan at the time, so the book fills that gap with a selection of color profile illustrations that bring to life some of the schemes worn by the Kate throughout its operational career. Further supplementing these and of great use to the modeler are a set of scale drawings that highlight not only the general arrangement of the B5N but also help describe the variant differences as well.

If you’re looking for a solid single-reference book on the B5N Kate, this is probably one of the best choices out there. While the development and operational histories are not as in-depth as a dedicated title devoted to each of those single aspects might be, it is perfect for those wanting to get that high level overview with perhaps a bit more detail. My thanks to Casemate for the review copy.