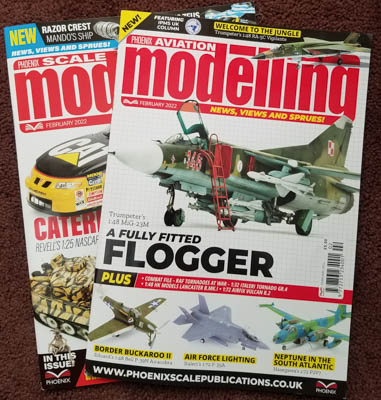 There's a new modeling publisher in the business, Phoenix Scale Publications, and they have sent a number of items to review. For our first look at their publications, we take a look at their new magazines, two periodicals meant for the modeling population.

The first one we look at is Phoenix Scale Modelling which is the magazine geared towards the broader, modeling population. It's broken up into six "sections" (which look like tabs at the top of the pages): Auto, Military, Aircraft, Figures, Sci-Fi and Maritime. Most of these sections contain one or more builds, followed by a short section on the latest releases for that section. For the February 2022 magazine, the only section that doesn't follow this outline is the Maritime section, relying just on pictures of boats and ships displayed at last year's Telford show. Each build article contains multiple pictures of the built model and a few contain in-progress images. Most of the items used - aftermarket and otherwise - are outlined in the text. In other words, a typical print-oriented article.

The second periodical that was sent for review was the Phoenix Aviation Modelling, again the February 2022 edition. The regular sections contained in the magazine are: The Newsstand, short previews of announced models; Czech News, which lists items announced from the Czech modeling manufacturers; In The Box, which consists of a few "in the box" looks; Accessories, which concentrates on aftermarket items; Decals, previewing some of the latest decal releases; and Bookshelf, providing explanations of some of the newest modeling publications. After the standard sections the actual builds commence.

Overall the magazines are glossy and contain some very nice photographs. Some of the build articles are pretty detailed while others are basically "I built this kit" with a little more detail. It's odd, though, to have an article from someone complaining about the scale of the kit being built, but still continuing to build it while complaining. Definitely off-putting. But otherwise, overall the magazaines are nicely produced. Their editing, though, could be enhanced a little. Plenty of grammatical mistakes throughout both.

It's good to see a new modeling magazine on the market, one generally highly produced. It will be interesting to see more upcoming issues, hopefully with 1/144 content. I definitely thank Phoenix Scale Publications for allowing me to review these magazines.