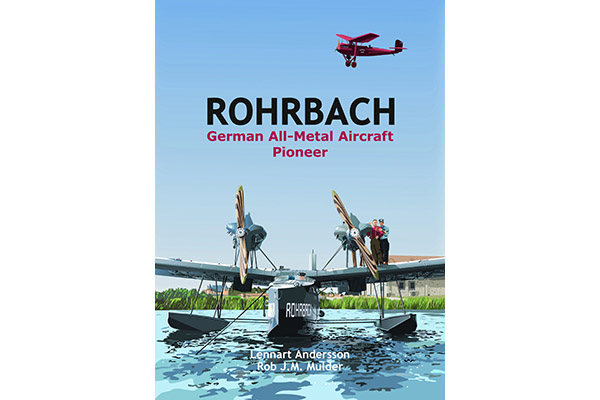 Early aviation was marked with wood and canvas, but technology moves forward quickly. A few aircraft designers saw the advantages of metal construction and embraced that technology. One such designer was Adolf Rohrbach, and by being an early adopter of metal construction, Rohrbach became one of the largest aircraft manufacturers in Germany during the 1920s. This new book from European Airlines takes a detailed look at Rohrbach and his aircraft company in both text and photographs.

Despite being one of the largest producers of aircraft, Rohrbach was not a hugely successful company. As the book documents, while his flying  boats were world record-holding aircraft, they often were commercial failures. A handful were successful, along with the Rohrbach Roland landplane, but for the most part, commercial success remained a challenge for Rohrbach. It is possible that the company could have survived into the latter half of the 20th century, but the financial crisis in 1929 proved too much for the company to overcome, and Adolf Rohrbach's death in 1939 ended any hope of the company remaining in the aviation business. While the overall success and failure of the company follows the story of many businesses during that time period, Rohrbach left a mark in other ways through pioneering innovation and invention and through the hiring of skilled designers such as Kurt Tank.

Following an overview of the Rohrbach company as a whole, the book delves into the individual aircraft designs, which occupies the majority of the book. The company was prolific in designs, and the authors have done an excellent job of scouring archives to find photographs of these aircraft. While those in widespread commercial service have greater potential of being photographed, the authors found photos of even the rarest Rohrbach designs. These photographs, combined with the text, makes this book the most thorough history of the Rohrbach company available. For those interested in the evolution of commercial aviation after the First World War, this is definitely a book worth having.

My thanks to European Airlines for the review copy. Visit their website to order this title and other books covering early aviation history.